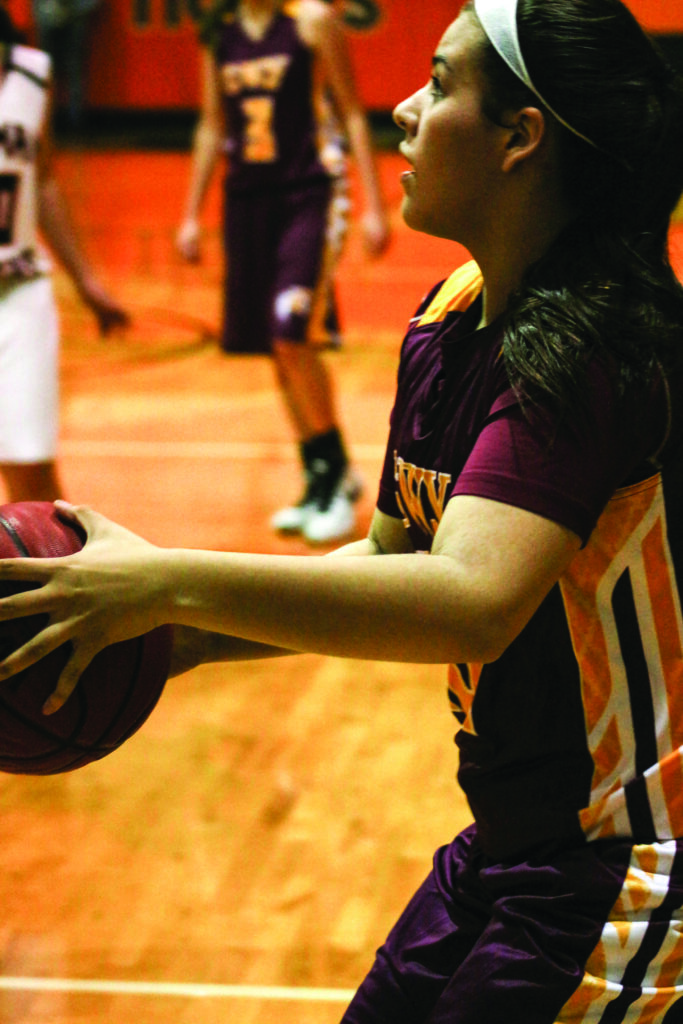 Timiyah Brown, Lady Braves sophomore center, lines up for a three point shot – which she made – in the first half of Friday’s game at Rosman. In her first game of the season following a leg injury, Brown scored 7 points. (SCOTT MCKIE B.P./One Feather)

ROSMAN – The Cherokee Lady Braves (10-3) were on fire as they came close to doubling the output of the Rosman Lady Tigers in a conference road win on Friday, Jan. 8.  Pooh King, junior point guard, led Cherokee with 22 points followed by senior guards LeLe Lossiah and Bree Stamper who scored 16 each.

Chris Mintz, Lady Braves head coach, was very happy with the team’s performance.  “I thought this was one of our best games yet.  They’re (Rosman) not a bad team, and we put it on them early and just kept it up, and that’s about as good at shooting as we’ve done all year long.”

The Lady Braves have had to fight around some key injuries all season long, and Coach Mintz was happy to have Timiyah Brown, sophomore center, back for this game – her first of the season following a leg injury.  “She gives us ball handling.  She gives us outside shooting.  She gives us an inside game.  Right now, we’re having to play with four guards so it makes a big difference with us.  She’s going to be a great addition for us.”

Cherokee started out well in this game and led 13-4 midway through the first period.  They extended that lead to 21-10 with just over a minute left.  In the last 50 seconds of the first, the Lady Braves went on a 7-0 tear to lead 28-10 after the first eight minutes.

The first few minutes of the third period were very similar to the second period and Cherokee went on a 10-2 run.  At the 5:31 mark of the third, Tori Teeseateskie, freshman guard, hit a three-point shot from near the top of the key to put the Lady Braves up by 42 points (65-23) thereby invoking the NCHSAA mercy rule and the clock ran continuously for the remainder of the game.  Teesateskie had nine points on the night – all three point shots.

With the clock running, the fourth period flew by and the Lady Braves took the big 35-point (77-42) win.

To view or purchase photos from this game, visit: https://onefeather.smugmug.com/SPORTS/BASKETBALL/LADY-BRAVES-BASKETBALL-201516/At-Rosman-January-8/