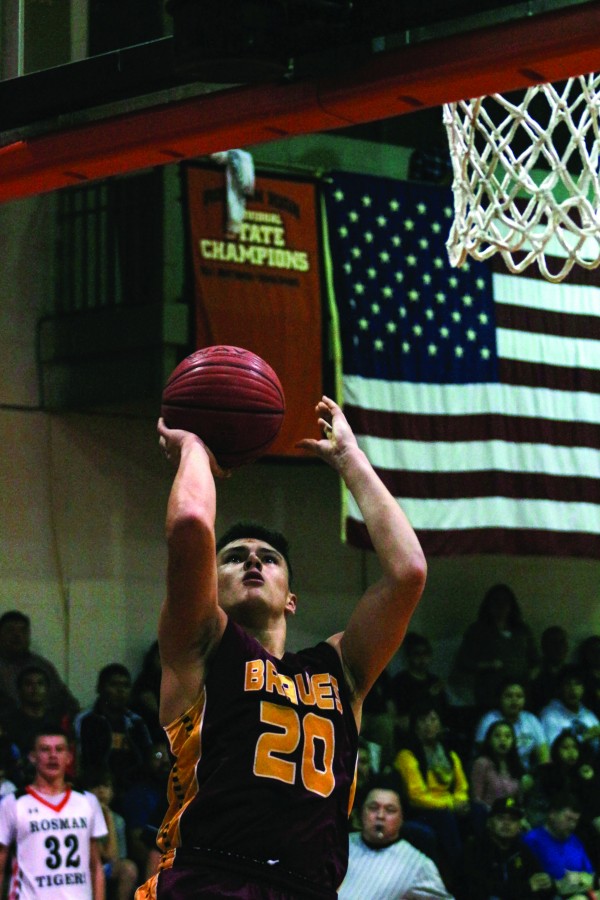 Holden Straughan, Braves sophomore forward, goes for a short shot in Friday’s game at Rosman. He helped anchor a strong inside game for the Braves and scored 15 points in the process. (SCOTT MCKIE B.P./One Feather)

ROSMAN – If you like to see the ball go through the hoop – a lot – then, you definitely should have been in the quaint, Hoosiers-esque gym at Rosman on Friday, Jan. 8.  The Cherokee Braves (10-3) topped the century mark with a big conference win (101-83) over the Rosman Tigers.

“I thought we played pretty good,” said Willis Tullos, Braves head coach.  “They’re a good shooting team, and we knew it was going to be a high scoring ballgame.”

The Braves were able to move the ball around well in this game, and the team showed its depth.  “We got good play from 11 people tonight.”

Cherokee pulled away some in the latter part of the second period and kept that pressure and momentum flowing after halftime as they outscored the Tigers by 11 in the third.  “Our depth made the difference,” said Coach Tullos.  “We started pressing them in the second period.  We didn’t think they could play four periods.”

Cherokee played a strong inside game all night with many points being made within the paint.  Leading that charge was Tye Mintz with 19 points followed by Holden Straughan with 15.  The Braves grabbed a bunch of boards led by Cory Junaluska with 8, Logan Teesateskie 7, Kennan Panther 6, Justus Day 5 and Mintz 4.

Cherokee began pounding the ball and strong, inside baskets by Mintz and Straughan helped to tie the game at 21-21 at the end of the first.

The Braves went on a 6-0 run in the first minute of the second period to take a 27-21 lead.  Rosman came back in the next few minutes and took back that lead at 29-28 with five minutes left in the half.  From that point, it was back and forth until the final minute of the second when Cherokee really began attacking the middle of the paint.  After gaining the lead back, Mintz drove the lane for a short put-away at the buzzer to give the Braves an 8-point lead (50-42) at the half.

Cherokee came out for the third period like gang busters and started runnin’ and gunnin’.  The full-court press combined with a quick inside game allowed the Braves to build a 58-44 lead just a few minutes into the period.  They kept up the pressure and ended up leading by 19 points (75-59) at the end of third.

The fourth period was relatively even and Cherokee got a lot of bench play.  Teesateskie hit a three-point shot from the right corner with 1:18 left in the game to put Cherokee over the 100-point mark as they would go on to a 101-83 win.

Rosman was led by Harper Reese with 28 points followed by Zach Stroup 13 and Deland Thomas 12.  Prior to the game, Stroup was honored by Rosman and presented with a ball commemorating his 1,000th career point which he scored on Tuesday, Jan. 5.

To view or purchase photos from this game, visit: https://onefeather.smugmug.com/SPORTS/BASKETBALL/BRAVES-BASKETBALL-201516/At-Rosman-January-8