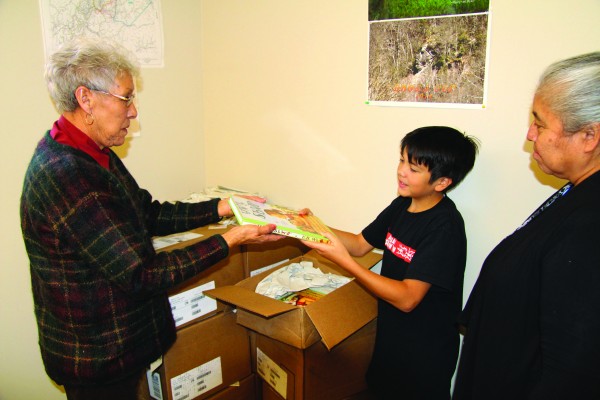 Taliquo Walker, an EBCI tribal member and student at New Kituwah Academy, opened a box on Wednesday, Jan. 6, and, in the process, opened a new chapter for Cherokee language immersion students.  The box Walker opened contained 201 fresh-off-the presses copies of “Charlotte’s Web” translated into the Cherokee language, and he was presented with the first copy out of the box by his grandmother, EBCI Beloved Woman Myrtle Driver.

“It is probably the greatest accomplishment for me,” said Driver who translated the book.  “It was three years in the making.  I didn’t work with it every day because I’d have to stop and translate a math lesson, a science lesson or another short story, and then I’d come back to it, but, this was the most fun.”

The project came out of a need.  New Kituwah students are learning to read in the Cherokee language, and as their reading levels increase, they need books to read and there aren’t many.  The school needed chapter books.

Bo Lossiah, curriculum specialist at the Academy, told the One Feather at the beginning of the project, “I chose Charlotte’s Web to be the first children’s chapter book to be translated because it is a well-written and illustrated classic.  It is a book for all age groups that speaks to us about discrimination, kindness, the natural process of death and friendship.” 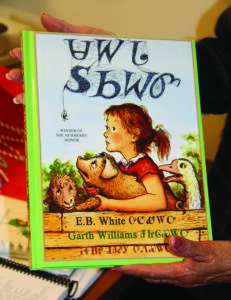 Driver holds a copy of “Charlotte’s Web” which she translated into the Cherokee language.

New Kituwah got permission for the translation from the E.B. White (author of the book) Estate with one book going to that Estate and the remaining 200 being used by students.  The book will not be sold publically.

Charlotte wrote her messages in the Cherokee syllabary throughout the book, and those illustrations were done by EBCI tribal member Billie Jo Rich.

Driver said working on the book was an intensive process, “Every time I would work on it, I would just immerse myself into the farm and into the community where Charlotte lived. And, when she died, I cried.”

This process took Driver back to a time in her life when Cherokee was spoken more often.  “There were times when I’d come across a word and I’d have to go outside and walk around for about an hour and then it would come to me.  I tried to use as many of the old words that we just don’t use in everyday conversation.”

Even some of the names in the book were changed to people that Driver has known.  “One example is Dr. Dorian. I used Amoneeta Sequoyah.  They used to call him Doc Sequoyah.  He was considered a Medicine Man.  He and his wife were my foster parents for awhile, and he just left a big impression on me.”

Driver said she also included Cherokee culture and traditions into her translation.  “I tried to put as much Cherokee into it, not only just the language, but how the animals respected each other, how they spoke, and they spoke properly. Not only will they immerse themselves, like I did, into the story, but they’ll learn how to treat each other and how to treat mankind.”

Driver related that translating “Charlotte’s Web” has made a lasting impression on her.  “I can’t kill a spider anymore after translating this book.  Every time I have to take a spider web down, I think of Charlotte.”

“Charlotte’s Web” was originally published in 1952 and was a Newberry Honors Book in 1953.