Council discusses elk and their place in community

Discussion on a request to apply for a grant turned into a large discussion on elk and their place in the Cherokee community during the Budget Council session on Tuesday, Jan. 5.  The EBCI Fisheries and Wildlife Management program submitted legislation seeking the opportunity to apply for grant funds through the Rocky Mountain Elk Foundation to purchase radio collars to help increase herd management.

“As the elk population grows, it will continue to be a bigger problem so we’ve fortunately been approved in this year’s budget to get some more staff on board to help serve the community in addressing some of these issues by providing technical assistance and also by providing some supplies for fencing material,” Mike LaVoie, EBCI Fisheries and Wildlife Management program manager told Council during discussion on the legislation.

He related that the State of North Carolina is currently looking into changing regulations to establish an elk hunting season.  “From our communications, this does not mean that they’re going to open up elk hunting next year.  It’s mainly to do some administrative legwork to have that in the future.” 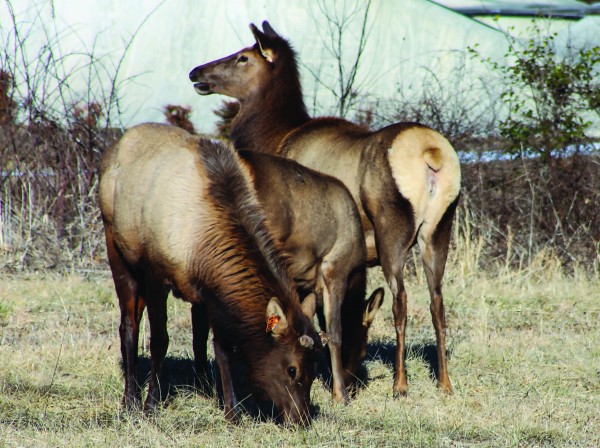 A group of elk is shown near the Cherokee Skate Park in the Yellowhill Community. (SCOTT MCKIE B.P./One Feather)

LaVoie added, “Obviously, the Tribe is going to have its own hunting needs, and that needs to balance out with what the state does in order that the population is sustainable.  Elk do generate revenue in terms of people coming to see them here, but it does place burdens on some tribal members.”

Big Cove Rep. Teresa McCoy said elk have become a nuisance in the community and asked, “What prevents a farmer from going out and shooting one of those animals because it ruined his garden?  Who is responsible for the elk?  Is it the Park?  Is it the Tribe?  Who do they (individuals) go to when damage is done?”

LaVoie responded, “The Tribe currently has a cooperative agreement with the National Park Service that outlines that it’s the Tribe’s sovereign responsibility to manage elk as they see fit.  These are the Tribe’s animals to manage.”

Rep. McCoy went on to say, “I always thought thinning the herd was a good thing to do, and I think it’s time to consider doing that.  People enjoy them, but they’re causing dangerous situations for us.  Tourists stand in the middle of the road.  Acquoni (Road) was backed up last week with elk and people were parked on both sides and halfway up on the sidewalk.”

Yellowhill Rep. B. Ensley said he plans to include the idea of an elk hunting season on tribal lands in with an upcoming Hunting Ordinance.  “I like looking at them myself, but when it comes to tearing up people’s gardens and tearing their yards all to pieces, I think it’s time to regulate it a little bit, and I think we can offer some type of lottery system for our enrolled members…I can’t speak for other communities, but in Yellowhill, we’re fed up with the elk.”

Lavoie asked for time to study the herd prior to a hunting season being declared.  “We are in the process, with partners, to understand this herd as a whole…the science is not there right now to tell us how many elk are here and how many can be killed to ensure that the population doesn’t crash because there are significant economic benefits of people coming to see elk and significant PR implications for Cherokee.”

He also stated, “All elk are no longer radio-collared or tagged when they are born so part of our ability to understand this population and monitor movement is to place our own tribal collars on an elk, particularly those that are born and raised on tribal lands.”

In December 2014, RTI International, on behalf of the N.C. Wildlife Resources Commission (WRC), released a 122-page report entitled “Evaluation of the Feasibility of Establishing a Huntable Elk Population in North Carolina”.  Several recommendations came from that report including, “The WRC should monitor and index the elk population annually to discern any trends in elk demographics and influence of harvesting on demographics.”

The study also recommends studying and recording human-elk incidents and limiting harvesting of elk to males.