BASKETBALL: Lady Braves hold on for win at Robbinsville 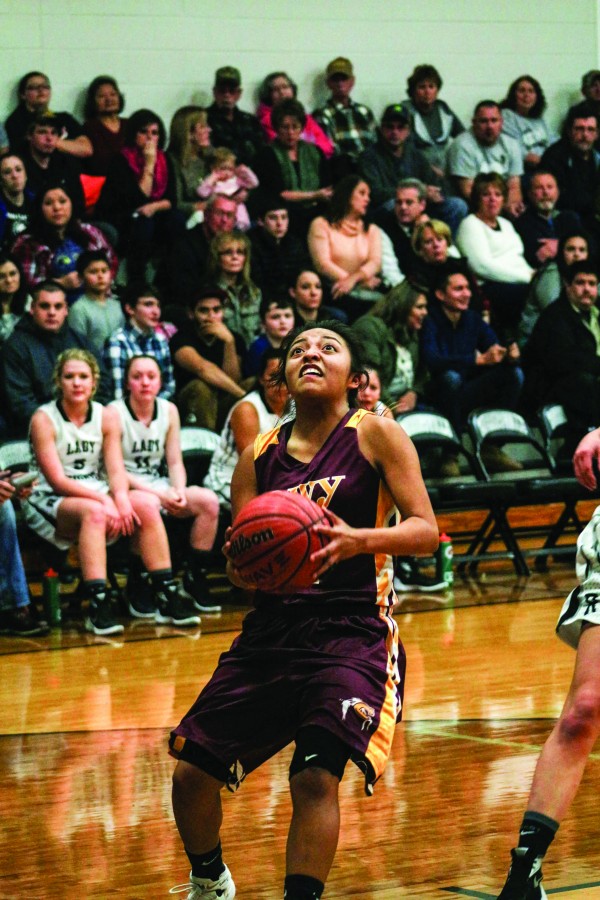 Pooh King, Lady Braves junior point guard, goes for a layup in the first half of Tuesday’s game at Robbinsville. She finished the game with 29 points. (SCOTT MCKIE B.P./One Feather photos)

ROBBINSVILLE – The Cherokee Lady Braves (9-3) had a big first period which proved to be the difference as they took a 70-65 win over the Robbinsville Black Knights (5-2) in a key conference road win on Tuesday, Jan. 5.  Cherokee jumped out to a 19-7 lead in the first period and led by as many as 20 in the second, but a scrappy Robbinsville team came back and made it a game in the second half.

Actually, Robbinsville outscored Cherokee in the last three periods of the game (16-15 in the second, 21-19 in the third, and 21-17 in the fourth).  From the start, Cherokee was down several players due to injuries and illness and only had a bench of three players.

“We were up and down,” said Chris Mintz, Lady Braves head coach.  “We jumped out to a 20-point lead and let it go, and then in the second half they called it really, really tight and we got into some foul trouble and our bench shrunk even more.  We just weathered the storm and did a great job at the end of the game – finishing the game.”

Cherokee jumped out in front early in this game and led 6-2 four minutes in.  Their high-pressure defense had the Lady Black Knights reeling, and the Lady Braves led 19-7 at the end of the first. 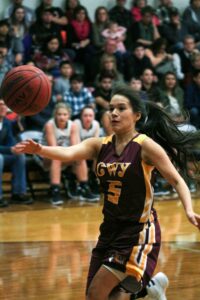 LeLe Lossiah, senior guard, hustles to chase a ball down in the second half.

Cherokee kept the pressure up and extended their lead to 15 points (26-11) at the 4:55 mark of the second.  Then, with just over three minutes left before half, Wolfe grabbed a steal and drove down for an easy layup to give the Lady Braves a 20-point lead (34-14).

From there, Robbinsville began to come back and scored the last 9 points of the half to cut into Cherokee’s lead at 34-23.

The third period was one of streaks.  First, Cherokee came out and outscored Robbinsville 9-2 in the first two minutes to take a 43-25 lead.  From that point, Robbinsville went on a 9-4 run making it 47-34 with 2:55 left in the third.  Cherokee led 53-44 going into the fourth period.

The Lady Braves led by as many as 10 points in the final period, but Robbinsville chipped away at it, but it wasn’t enough as Cherokee took the 70-65 win.

Coach Mintz praised his team for fighting through some adversity.  “The ones that are playing keep improving, and the ones that will come back will help just that much more.  We just keep getting better.  They’re working hard and doing the best they can and that’s all I can ask from them.”

Carla Wolfe and Jordan Maney rounded out Cherokee scoring with 2 points each.

To view or purchase photos from this game, visit: https://onefeather.smugmug.com/SPORTS/BASKETBALL/LADY-BRAVES-BASKETBALL-201516/At-Robbinsville-January-5/