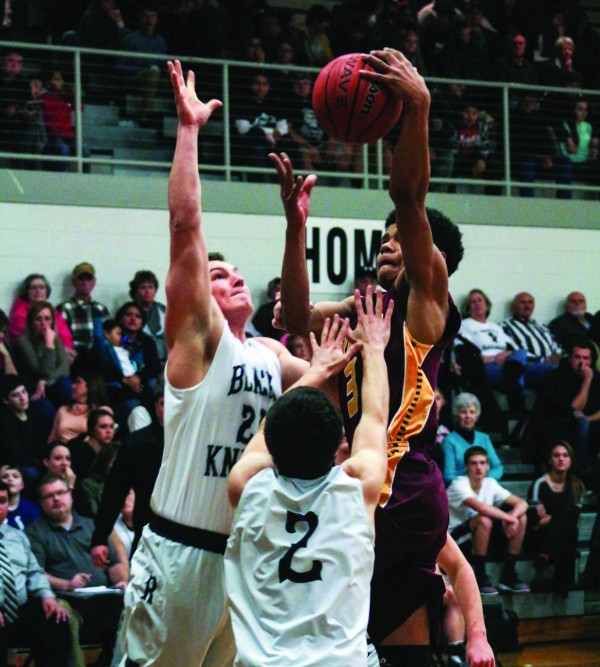 ROBBINSVILLE – The Cherokee Braves (9-3) played strong defense in a 27-point win (87-60) against the Robbinsville Black Knights (4-3) in a key Smoky Mountain Conference match-up on Tuesday, Jan. 5.  Cherokee jumped out early scoring five points in the first 17 seconds, and they never trailed in the game.

“We played well in spots,” said Willis Tullos, Braves head coach.  “We just can’t play well the whole ballgame.  We had some dry spells.  We didn’t execute sometimes.  We fumbled the ball around a lot, and that’s the only thing I was disappointed in – our execution and ball handling in certain situations,  but they played hard.  My kids always play hard.”

Jason McMillan, senior point guard, led Cherokee with 31 points followed by Justus Day, sophomore forward, with 19.  On the night, Robbinsville (62 percent) shot better than Cherokee (48 percent), but the Braves took almost twice as many shots (50 to 26).

After their quick start, Cherokee kept the pressure up and led 19-2 midway through the first quarter.  Then, at the buzzer ending the first, McMillan hit a three-point shot to give the Braves a 22-point lead (33-11).

Robbinsville came back some in the second period outscoring Cherokee 27-20 and cutting the Braves’ lead to 15 (53-38) at the half.

Cherokee extended its lead in the fourth outscoring Robbinsville by 9 points to take the big 87-60 win.

The Braves played good defense and got 14 steals including 5 by Day and 3 by McMillan.  Cherokee hit the boards better in this game led by Cory Junaluska with 5 and Day and Kennan Panther with 4 each.

To view or purchase photos from this game, visit: https://onefeather.smugmug.com/SPORTS/BASKETBALL/BRAVES-BASKETBALL-201516/At-Robbinsville-January-5/