On a cold night in November 1952 near Songnae-dong in Korea, a young Cherokee warrior jumped on a live grenade and saved two fellow soldiers.  For his heroic action, which cost him his life, PFC Charles George, an EBCI tribal member from the Birdtown Community, was awarded the nation’s highest military award – the Medal of Honor.

PFC George has been honored recently with the VA Medical Center in Asheville and a bridge in Cherokee both being named in his honor.  Now, the EBCI PFC Charles George Memorial Fund Project Committee is seeking to have two life-size statues constructed of PFC George – one of which will set in front of the Charles George VA Medical Center and another which will be displayed at a spot in Cherokee to be designated later.

Tribal Council unanimously approved a one-time donation of $35,000, representing the entire fundraising amount needed for the project as stated by the Project Committee, during its Budget Council Session on Tuesday, Jan. 5.  The Committee related it has raised $6,000 to date.

At first, it was discussed to give the Committee the difference of $29,000, but Birdtown Rep. Travis Smith suggested to give the entire $35,000 and let the $6,000 that has been raised so far to be used for any extra expenses including those associated with a plaque to go with both statues describing PFC George’s actions.

Cherokee County – Snowbird Rep. Adam Wachacha, himself a U.S. Army veteran, seconded McCoy’s move and commented, “This is for a member of our tribe who gave the ultimate sacrifice during the line of duty.  We need to step up and provide the funding for this.”

According to the resolution accompanying the funding request from the Project Committee, James Killian Spratt, a U.S. Navy veteran and long-time patient at the Charles George VA Medical Center, is the sculptor on the project.  “Mr. Spratt wants to show his appreciation for the VA Medical Center facility by providing his services, foregoing his artist fee, to create a life-sized bronze statue of PFC Charles George in an Army dress uniform accurate to the period and unit decorations, standing at the position of attention…”

The funding is needed to cover the cost of materials and studio use.

Painttown Rep. Marie Junaluska has been working with the Committee and commented, “We’re looking forward to the completion of this.”

She added, “We’re hoping that the statue (in Cherokee) can be put somewhere in heavy traffic.  We want it to be where it’s safe and secure and won’t be stolen, but in an area where there’s a lot of traffic and it will be seen.”

Following the approval of the funding, Vice Chief Richie Sneed, a Marine Corps veteran, noted, “I think it’s important for our young people to see what we have in our history.  It’s a huge honor to be a Medal of Honor winner.  I want to thank the Committee for the work they are doing.” 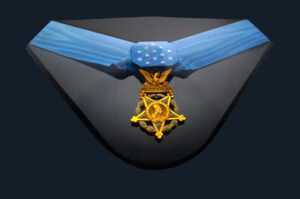