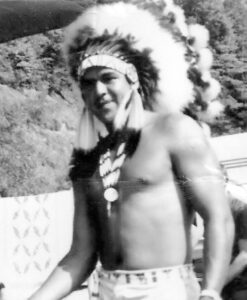 Joseph Feather, 72, of Cherokee, passed away Tuesday, Nov. 24, 2015 at the Cherokee Indian Hospital.

He was born Sept. 11, 1943 in Cherokee to the late Jonah Feather and Minnie Smith Feather.

Joe was a vibrant character.  When he entered a room, his presense was demanded, not only by his size and build, but also by his colorful personality.  He was a great storyteller and artist by nature.  In his younger days, he played stickball, football, and boxed.  He was said to have been the best football player in Swain County having only played one game he said.  A favorite memory shared with his son, Dane, and granddaughter, Jatanna, was when they went to Phoenix, Ariz. to compete in the world Hoop Dance competition.  It was the first time a grandfather, a son, and a granddaughter competed in the same year.  He placed fourth.  Joe can be remembered best for his paintings, storytelling and flute playing.

In addition to his parents, Joe is preceded in death by sons, Joseph Lee Feather and the twins; brother, David Robert Feather; sisters, Julie Ann Feather and Nancy Feather.

Pallbearers were among family.