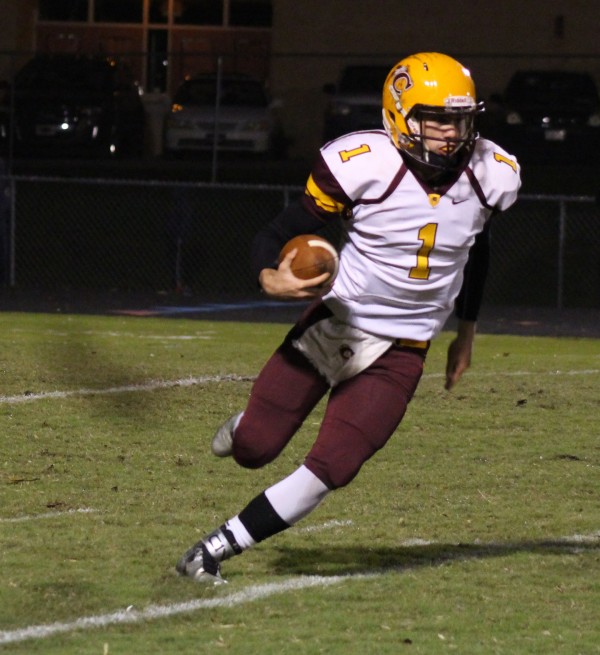 Tye Mintz, Braves sophomore quarterback had a big night as he rushed 11 times for 136 yards and 1 touchdown and completed 15 of 28 for 182 yards, 1 touchdown and 1 interception. (SCOTT MCKIE B.P./One Feather photos)

ANDREWS – Tye Mintz, Braves sophomore quarterback, accounted for over 300 yards of total offense in a first round playoff loss at Andrews on Friday, Nov. 13.  He rushed 11 times for 136 yards and 1 touchdown and completed 15 of 28 for 182 yards, 1 touchdown and 1 interception, but it wasn’t quite enough as the Braves (4-8) fell 26-14 to the Wildcats (6-6) on a cold night in Cherokee County.

The first quarter was dominated by defense as both teams punted on their first two possessions of the game.  With 3:30 left in the first quarter, Cherokee started their third possession on their own 18-yard line.  Mintz connected with Anthony Toineeta, who finished the game with 2 catches for 28 yards, on a 12-yard pass on a 3rd and 8 to keep the drive alive.  On the very next play, Mintz found a seam on the left side of the Wildcats defense and scampered 67 yards for the first score of the game.  Dodge Crowe-Moss added the extra point and Cherokee took a 7-0 lead with 1:50 left in the quarter.

The Braves moved the ball some on their next possession, but the drive stalled at the 30-yard line and they were forced to punt.

Cherokee would get the ball back three plays later on an Andrews fumble that was recovered by Crowe-Moss.  The Braves got 13 yards on first down on a pass play from Mintz to Holden Straughan, who had 7 catches in the game for 91 yards, but the drive stalled near midfield and they were forced to punt. 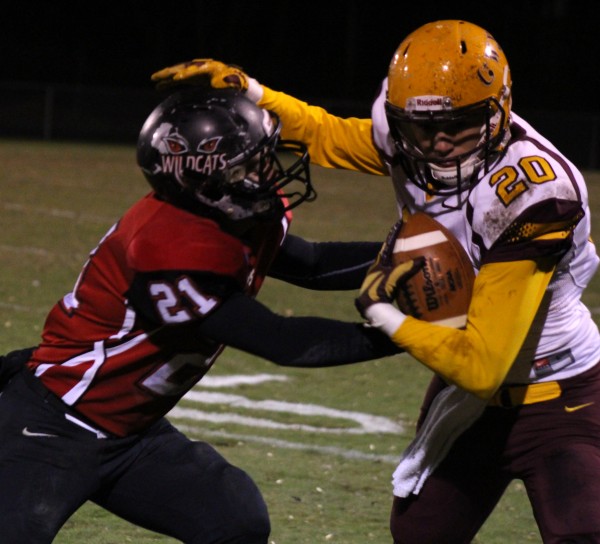 Holden Straughan (#20), Braves sophomore wide receiver, runs tough following a catch. On the night, he had 7 receptions for 91 yards.

The Wildcats started their next possession at their own 23-yard line and put together a 10-play drive that included a 47-yard run by Taylor Parker and culminated with a 4-yard touchdown run by Parker.  The extra point kick failed and Cherokee led 7-6 with 8.3 seconds left in the half.  On the night, Parker rushed 24 times for 219 yards and 4 touchdowns.

Coming out of the locker room for the third quarter, Andrews got the ball first and started on their own 35-yard line.  Seven plays later, Parker ran 57 yards for his second touchdown of the night.  The two-point try failed and Andrews took a 12-7 lead at the 9:06 mark of the third.

The Braves turned the ball over on downs on their next possession, and Andrews started at their own 41-yard line.  Cherokee’s defense held tightly and the Wildcats were forced to punt.

The Braves bobbled the punt which was recovered by Andrews’ Matthew Barton at the Cherokee 14-yard line.  On the next play, Parker ran 14 yards for this third score of the game.  Tyler Rose caught a Dillan Phillips pass for the two-point conversion to put Andrews up 20-7 at the 5:56 mark in the third quarter.

Cherokee’s next possession ended in an interception by the Wildcats’ Rose and Andrews started their next drive at the Braves 41-yard line.

The Wildcats drove deep into Braves territory, but that drive ended when Kennan Panther, Braves senior linebacker, intercepted the ball at the Andrews 5-yard line and returned it to the 11.

Cherokee drove down the field in nine plays which included a 25-yard run by Isaiah Evans and a 22-yard pass completion from Mintz to Straughan.  The drive culminated in a 20-yard touchdown pass from Mintz to McMillan.  Crowe-Moss added the extra point and Cherokee closed the gap at 20-14 with 7:20 left in the game.

Andrews got the ball at their own 41-yard line following the kickoff and put together a 12-play drive that took six minutes off the clock and ended with a 3-yard touchdown run by Parker.  The two-point try failed and Andrews took a 26-14 lead which is how the game would end.

To view or purchase photos from this game, visit: https://onefeather.smugmug.com/SPORTS/FOOTBALL/BRAVES-FOOTBALL-2015/At-Andrews-first-round-of-1A/