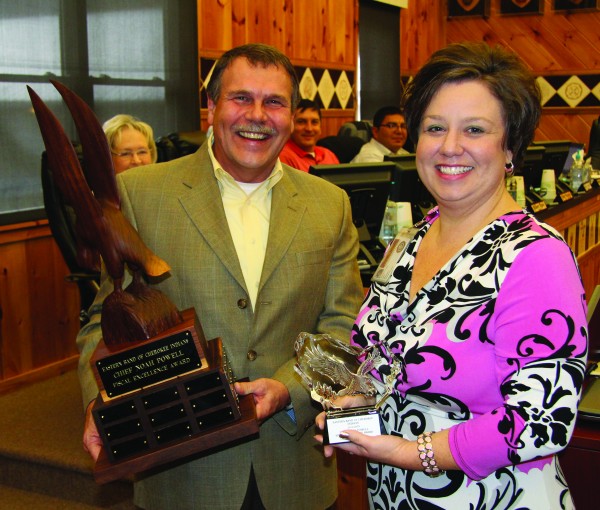 Five tribal programs were rewarded for their fiscal responsibility in the previous year with SOAR (Success in Operations, Accounting, and Reporting) Awards that were presented during the regular session of Tribal Council on Thursday, Nov. 12.  Cherokee Home Health took home the top award, the Chief Noah Powell Fiscal Excellence Award, named after the 21st Principal Chief of the Eastern Band of Cherokee Indians.

“This program (SOAR) is designed to highlight programs and promote fiscal excellence amongst our tribe,” said Sharon Blankenship, CIA, CGAP, CFE, chief audit executive with the EBCI Office of Internal Audit.  She related that the programs receiving awards received nominations which were then reviewed by the Audit Committee.

Rebecca Claxton, CFE, audit manager with EBCI Office of Internal Audit, read a brief synopsis of each program honored from their nomination forms.

“In 2012, Cherokee Home Health was at risk for closing,” she said.  “Over the past three years, Cherokee Home Health has undergone substantial structural changes with the largest changes involving job descriptions, the Home Health software systems and billing.  Even though job duties were modified and positions eliminated, all members of the team remained intact and dedicated to change and thereby improving the Home Care provided to tribal elders and disabled (persons).”

She went on to say, “Individual accountability was enhanced with implementation of software requiring team member’s input to maintain appropriate workflow through the department.”

Claxton said at the beginning of the project, the outstanding accounts receivable amount was over $400,000 and now is less than $130,000 and revenues are 20 percent ahead of projections for FY2015.  “The results of the changes have led to better care, system services and transparency with tribal leadership.”

Claxton commented on EBCI Transit, “So far, in 2015, Transit has provided transportation to 45,721 enrolled members and visitors covering 366,278 miles over 23,022 hours.  In addition, medical transport has provided 6,138 rides to enrolled members for medical appointments and dialysis.”  She related that in 2015, EBCI Transit began giving rides to tribal programs needing transportation.  “This saves the tribe from having to purchase a new vehicle.”  Claxton also noted that 38 percent of the program’s budget is from state and federal dollars.

Cherokee Fire & Rescue has increased the number of career firefighters on staff from 19 to 33 over the last several years according to Claxton.  “The additional firefighters allow fire trucks to respond to fires with enough personnel on the truck to fight the fire.  In addition, all levels of job descriptions were re-written for higher qualifications which equates to better trained firefighters and officers.”

She added that Cherokee Fire & Rescue’s call volume is in excess of 2,000 calls annually.  Claxton added that the program is very active in community education and also actively seeks grant funding to supplement itself.  “In FY15, the department received two grants totaling $500,000 which was used to replace gear and equipment.  The improvement in fire protection services has lowered the insurance service office rating thereby decreasing the cost to home owners’ and business owners’ insurance premiums.”