On the eleventh hour of the eleventh day of the eleventh month, veterans were honored in Cherokee.  The Steve Youngdeer American Legion Post 143 hosted its annual Veteran’s Day Celebration at the Cherokee Indian Fairgrounds on Wednesday, Nov. 11.

“We commemorate the service of our veterans,” said Post 143 Commander Lew Harding.  “We remember how they interrupted their lives to defend freedom and preserve our opportunity to live free in our great country.  We appreciate their determination to serve us and to serve us well and serve us honorably.”

He added, “In Veteran’s groups here and around the country, they continue their service with a  profound sense of gratitude to the men and women who gave their lives as part of the cost of serving their country.  Out of blood, sweat and tears, our veterans have learned a purpose, sacrifice, tolerance, bravery and discipline – the solid foundations upon which our country is built.” 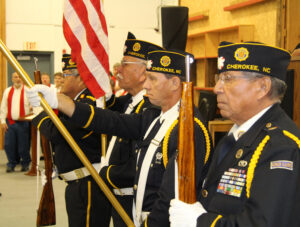 Chief Lambert commented, “Let me begin by giving a very humble thank you to all of our veterans, to all of our current serving men and women in the Armed Forces today and also to our brave men and women of our local emergency services who wear a uniform to protect us here at home.”

He went on to say, “Whether it’s a school teacher, a construction worker, a first responder, or our American Legion doing graveside services for our veteran’s families, military veterans take their mission seriously.  They vote in higher percentages than non-veterans and are they more likely to volunteer in their communities.  In short, veterans make our communities better.  From extraordinary accomplishments comes extraordinary debt, and for their dedication and accomplishments, we must always be grateful. In this spirit, we must always remember that each veteran represents an Oath taken that included a willingness to die if called upon.”

Vice Chief Sneed said, “It is very encouraging to see so many people come out today to honor our veterans, and I thank you for your presence here.”

He spoke on the principles of liberty and honor and noted, “There are those who are the keepers of the flame of liberty, those who understand the eternal value of this precious gift that we have been entrusted with, and we have been entrusted with it.  These are the warriors of our society, not tyrants who wish to impose their will upon the weak, but selfless warriors who willingly place themselves in harm’s way so that others might enjoy the opportunities that are afforded those who have freedom.  They do not seek praise for themselves.  They do not wish to shine a light upon their heroic actions, and when honor is bestowed upon them, they humbly reply, ‘I was simply doing my duty.’”

Several awards were given during the event including:

At the end of Wednesday’s event, Chief Lambert, former Principal Chief Robert S. Youngdeer, Maj. William Underwood and SFC Clifford Long placed a wreath  honoring the memory of those who lost their lives in military service.

To view or purchase photos from this event, visit: https://onefeather.smugmug.com/2015-Community-Events-and-News/Veterans-Day-Celebration/i-kCbvWKh