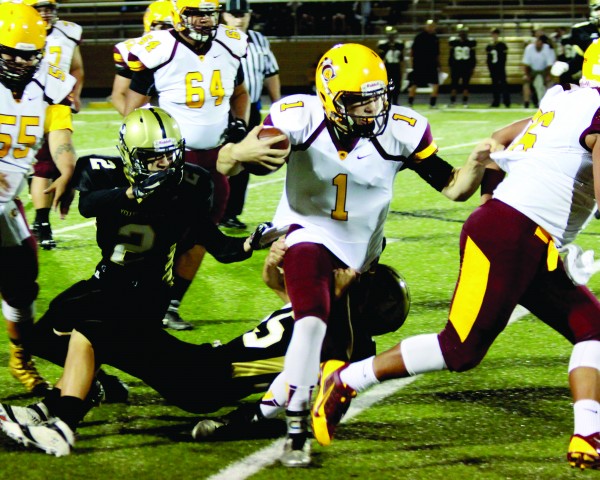 HAYESVILLE – The Cherokee Braves (4-7) finished the 2015 regular season with a strong victory over the hosting Hayesville Yellow Jackets (3-8) on Friday, Nov. 6 with a final score of 45-28.

The high scoring affair was led by Tye Mintz, Braves sophomore quarterback, who finished with a QB rating of 141.  He completed 8 of his 12 pass attempts for 126 yards, and 2 touchdowns.  Mintz also led the Braves rushing attack with 146 yards on 17 carries.

“I’m proud of our young men because they did some great things to win a football game,” said Braves Head Coach Kent Briggs.  “You have to give Hayesville credit.  They played hard until the end and we had to stay composed and work hard to get the win.  Hopefully, this will get us on a roll and give us momentum going into the playoffs next week.”

The Braves defense forced a punt on the Yellow Jacket’s first possession and took over inside the Cherokee 5-yard line.  After an illegal procedure penalty against the Braves, Cherokee began their drive at the 3-yard line.  With their back against the wall, Mintz connected to Jason McMillan, Braves senior wide receiver, on a 33-yard strike to give the Braves a fresh set of downs at the 35-yard line. A few plays later, Mintz connected to McMillan again for a 9-yard touchdown pass, capping off a 97-yard scoring drive.  The point-after was no good, and the Braves took a 6-0 lead at the 4:14 mark in the first quarter.

The Braves forced another Yellow Jacket punt on their second possession of the night.  A few plays later, Mintz found the end zone with an 11-yard touchdown run as time expired in the first quarter.  A successful point-after kick by Dodge Crowe put the Braves up 13-0 at the end of the first quarter.

At the 3:27 mark in the second quarter, Hayesville RB Braxton Cox, scored on a 14-yard run.  The point-after was no good to make the score 13-6.  Cherokee would answer back a few minutes later as Mintz connected to McMillan again on a 26-yard pass with 1:04 left in the second quarter.  The point-after failed and Cherokee took a 19-6 lead at halftime.

The Braves received the ball to start the second half and wasted little time getting back on the board as Mintz ran 55 yards for a score at the 10:53 mark.  The point-after failed and the Braves led 25-6.  A few possessions later, Hayesville’s Kyle Rhinehardt connected to Braxton Cox on a 3-yard pass for a touchdown.  A 2-point run by Josh Harris brought the score to 25-14 at the 0:50 mark of the third quarter.

The Yellow Jackets returned the kickoff to about midfield and began putting together a strong drive into Cherokee territory.  However, a fumble at the Cherokee 27-yard line was picked up and returned for a 73-yard touchdown by Logan Teesateskie, Braves senior Linebacker.  Justin Brady booted the extra-point to put the Braves up 45-21 at the 3:54 mark.

Hayesville’s Rhinehardt would connect to Josh Harris on a 13-yard touchdown pass late in the fourth quarter to bring the score to 45-28.  The Braves would recover an on-side kick by the Yellow Jackets and ran the victory formation to close out the game with a final score of 45-28.

“We played as a team, and I feel pretty good going into next week (NCHSAA Playoffs),” said McMillan after the game.  “I think we finally clickedand we’re hoping to do good next week.”

Kennan Panther, Braves senior linebacker, related, “This is my last year going out in a Cherokee Braves uniform.  I’m going to make sure our team is ready to play next week.  We are going to focus on what we did wrong tonight and fix the mistakes for next week.”

Teesateskie added, “We did well, but we could have executed better tonight.  I’m looking forward to playing in the playoffs and hopefully making it to state.  We’re going to work hard all week.”

When asked how he feels about the team this year, he had one word, “proud.”

To view or purchase photos from this game, visit: https://onefeather.smugmug.com/SPORTS/FOOTBALL/BRAVES-FOOTBALL-2015/At-Hayesville-November-6/i-pG3gjPD

With the victory, Cherokee secured the number 9 seed and will travel to the number 8 seed Andrews Wildcats on Friday, Nov. 13 at 7:30pm for the first round of the NCHSAA playoffs.