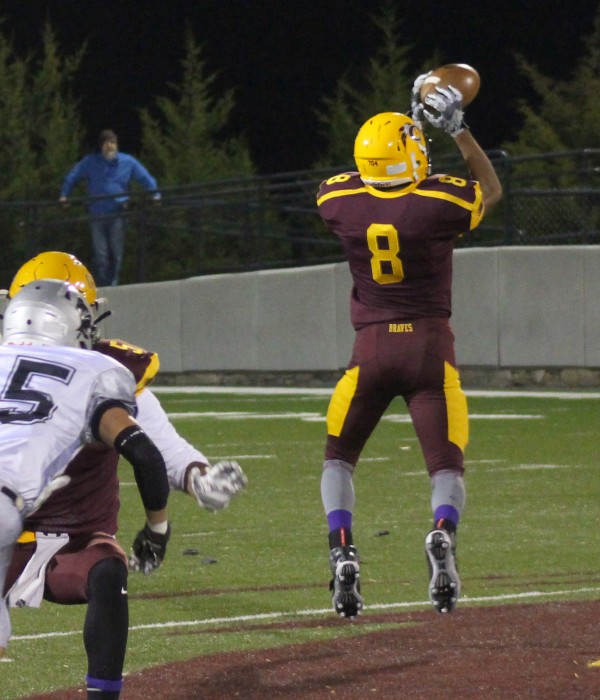 Jason McMillan (#8), Braves senior wide receiver, catches a ball in the first half of Friday’s home game against Robbinsville. On the night, he had 7 catches for 72 yards and a touchdown. (SCOTT MCKIE B.P./One Feather photos)

The final score didn’t reflect it, but it was a close game until about five minutes left as the Cherokee Braves (3-7) hosted the Robbinsville Black Knights (7-2) at Ray Kinsland Stadium on Friday, Oct. 30.  Following a goal-line stand which saw the Braves turn the ball over on downs, Robbinsville scored 14 points in the final two minutes to take the 27-7 win.

Tye Mintz, Braves sophomore quarterback, had another strong night in the air completing 18 of 33 passes for 209 yards, 1 touchdown and 2 interceptions.  Jason McMillan, Braves senior wide receiver, was his main target and caught 7 passes for 72 yards and a touchdown.  Isaiah Evans, Braves freshman running back, had over 100 yards of total offense on the night as he rushed 10 times for 38 yards and caught 7 passes for 63 yards.

Robbinsville won the toss and elected to take the ball first.  They started at their own 39-yard line and put together a 10-play drive that culminated with a 2-yard touchdown run by Colby Hemphill who rushed 13 times for 73 yards on the night.  Freddy Romero added the extra point and the Black Knights took an early 7-0 lead at the 7:27 mark of the first quarter.

Cherokee was forced to punt following a three-and-out on their first possession of the night.

The Black Knights started at their own 37-yard line following the punt and drove down the field on an 11-play drive that took six minutes off the clock and ended with a 1-yard touchdown run by Ian Wiggins.  The extra point failed and Robbinsville led 13-0 with 1:53 left in the first.

Cherokee fumbled on the third play of their next possession and Robbinsville took over at the Cherokee 31-yard line.  But, the Braves defense held strong and following a big sack by Holden Straughan, Braves sophomore defensive back, on fourth down, the Black Knights turned the ball over on downs. 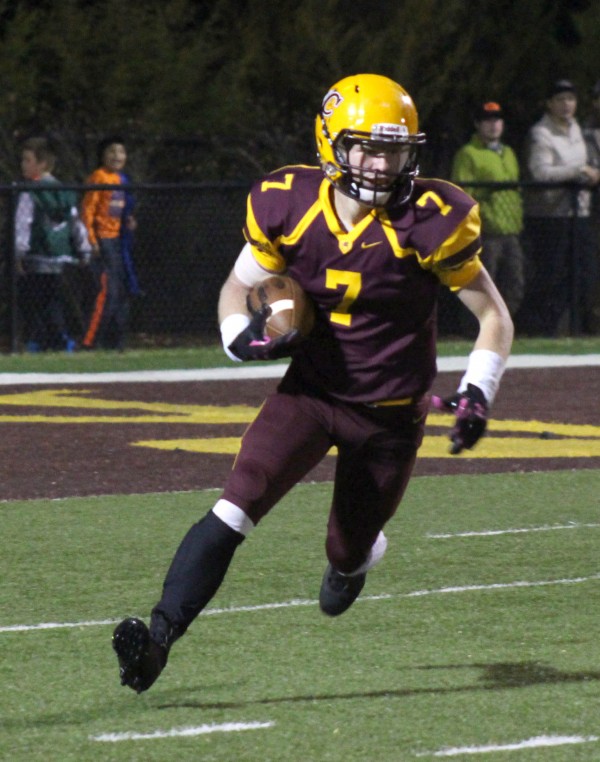 Cherokee’s Luke Woodard returns an interception he made in the waning seconds of the first half.

Cherokee took over at their own 28-yard line and put together a nice drive that included two nice passing plays from Mintz to Evans (20 yards and 13 yards) that took the Braves deep into Robbinsville territory.  The drive ended however as Millsaps intercepted a Cherokee pass at the 2-yard line.

Cherokee’s defense held strong again and Robbinsville was forced to punt following a three-and-out, and the Braves started at their own 30-yard line.

The Braves kept plugging.  Evans caught a Mintz pass for an 11-yard gain on first down.  Two plays later, Mintz kept the ball for a 17-yard gain.  Several plays later, McMillan caught a pass for a 20-yard gain down to the Black Knights 4-yard line.  Following a loss, McMillan caught a 5-yard touchdown pass from Mintz on the next play to put Cherokee on the board.  Dodge Crowe-Moss added the extra point and Cherokee cut into the Black Knights lead 13-7 with 39 seconds left before the half.

Robbinsville started their final possession of the half at their own 30-yard line and tried some passing plays, but Luke Woodard, Braves defensive back, ended their drive and the half as he intercepted the ball at the Cherokee 10-yard line.

Cherokee kept that momentum going as they came out for the third quarter.  Following the kickoff, they started at their own 30-yard line and started driving.  They moved the ball down the field on a steady diet of passes to Evans and McMillan.  In 10 plays, Cherokee had driven inside the Robbinsville 10-yard line to set up a first and goal from the Black Knights 8-yard line.

The Braves were unable to punch it in, however, and following an incomplete pass to Straughan on fourth down, Cherokee turned the ball over on downs at the Robbinsville 6-yard line.

But, again, Cherokee’s defense held and forced a Black Knights punt and Cherokee took over in good field position at their own 45-yard line.

On first down, Robbinsville’s Will Crisp intercepted the ball and the Black Knights took over at their own 32-yard line.

They would only keep the ball for six plays as Cherokee’s Dawson Wilnoty pounced on a Black Knights fumble and Cherokee got the ball back at their own 41-yard line with 6 seconds left in the third quarter.

Cherokee started the fourth quarter and started driving again.  A 31-yard pass play to Straughan put the Braves at a first and goal from the Robbinsville 4-yard line.  The next 30 seconds of the game took almost 15 minutes to play due to a plethora of penalties on both sides.  In the end, Mintz tried a keeper on a fourth and goal from inside the 1-yard line and was stopped by Robbinsville.

The Braves received a 15-yard personal foul penalty on that play and Robbinsville took over at the Cherokee 16-yard line with 9:04 left in the game.

Nine plays later, Wiggins would score his second of the game on a 28-yard run.  The two-point conversion failed and the Black Knights took a 19-7 lead with 5:30 left in the fourth.

Cherokee got a safety for an intentional grounding call in the end zone on their next possession to make it 21-7, and the Black Knights would add another score late in the game as Reece Adams caught a 14-yard pass from Millsaps.  The extra point failed and Robbinsville led 27-7 which is how the game would end.

To view or purchase photos from this game, visit: https://onefeather.smugmug.com/SPORTS/FOOTBALL/BRAVES-FOOTBALL-2015/Vs-Robbinsville-October-30/i-x8FFVCT

Cherokee travels to Hayesville to finish their regular season on Friday, Nov. 6 at 7:30pm.