Tribe to do feasibility study on cannabis

The Eastern Band of Cherokee Indians is going to look into the possibility of legalizing cannabis for medical, industrial and recreational uses.  Tribal Council passed Resolution No. 40 unanimously during Annual Council on Thursday, Oct. 29 which calls for a feasibility study to be performed to look into the “issues and impacts associated with legalization of cannabis”.

The Resolution was submitted by three EBCI tribal members whom are part of a group known as Common Sense Cannabis including Joseph Owle, Aaron Hogner, and Yona Wade.

“Cannabis is a plant,” said Owle.  “As Cherokee people, we know that plants are medicine.” 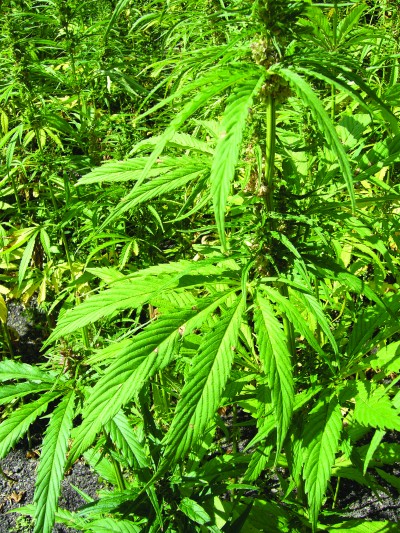 An outdoor hemp plantation is shown in the United Kingdom. This particular variety of Cannabis sativa is “industrial hemp” which contains ultra-low levels of Delta-THS and other cannabinoids, which makes it useless for recreational/medicinal purposes. (Photo by Nabokov/Public Usage)

Wade said that cannabis is an alternative to opioid pain medications and should be explored by the tribe.  “We’re not asking for legalization of cannabis.  What we’re asking is that the community come with an open mind.”

Hogner spoke about the possible economic benefits and said, “I think this is a great opportunity for us.  We can’t rely on gaming.”

Missy Crowe, an EBCI tribal member from the Yellowhill Community, commented, “From my research, I’d rather see someone use marijuana for medical purposes or recreation than alcohol.”

A cancer survivor, Crowe also noted, “A lot of you know that it does help our cancer patients, especially those going through chemotherapy or radiation.”

Yellowhill Rep. E. Ensley said, “The last time this issue was discussed in the Yellowhill Community Club, they were completely opposed, but I told Joey (Owle) I’d keep an open mind, because it is a business.”

He made an amendment to the legislation that the funding come from the grant match line item in the tribal budget and that the feasibility study be managed through the EBCI Public Health and Human Services division.  The resolution states that the study group “be comprised of three members of the Common Sense Cannabis, a representative of the Legal Division, a representative from Public Health and Human Services, two representatives of Tribal Council or the Planning Committee.”

Big Cove Rep. Teresa McCoy touted the medicinal uses.  “Do you know how much money Indian Health Service could save by prescribing this natural medicine instead of opiates?  It’s medicine.”

She did add, “I’m not an advocate for recreational use.  My community would never allow that.”

Wolfetown Rep. Bo Crowe said he supported the use for medicinal purposes, but added, “One thing I don’t agree with is the recreational part…right now, I do think it’s worth looking into.  It’s just a study.”

Rep. McCoy further stated during the debate, “We’re not voting today to legalize it in any form or fashion.  All we’re talking about is a feasibility study to see if it’s even feasible.”