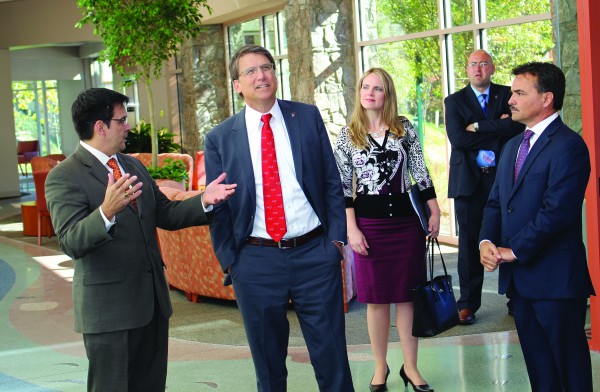 By ROBERT JUMPER
ONE FEATHER EDITOR

First, he was scheduled for a tour of the new Cherokee Hospital facility. Then, he had a closed session discussion with Principal Chief Patrick Lambert, Vice Chief Richard Sneed and members of the Tribal Council. Details of that discussion were not released. Finally, House Bill 850 received the Governor’s signature and became law. House Bill 850 makes official a relationship that has existed for several years.

Prior to the signing, the Governor was given a tour of the hospital by hospital administrator Casey Cooper and Principal Chief Patrick Lambert. They specifically went to the new hospice wing and reviewed the patient suites. The Governor repeatedly commented on the “excellent and impressive” design of the building and rooms. He enjoyed the integration of nature, tribal history and legend into the design of the rooms and common areas.

Principal Chief Lambert opened the signing with an introduction. “I would like to welcome the Governor to the Cherokee Indian Reservation today. We’ve had a great meeting and toured the facility. Governor, we are glad you are here today with our Tribal Council. I appreciate you coming here today to sign the bill with us. Sgi.”

Gov. McCrory addressed the gathering, “Let me first say that I am so impressed with this new hospital facility. I think this will be the prototype hospital not only throughout North Carolina, but throughout the United States in the future. In fact, I hope to bring more people here to tour this in the near future, and we have also had some wonderful conversations on some Medicaid reform and how to implement that, on mental health issues that we are all going to have to deal with throughout the state of North Carolina and also the public safety issues and other issues that we are dealing with today. So, I appreciate the teamwork, I appreciate getting to see you again, your new Council members as well as some of your veteran Council members who have been here for many, many years.” 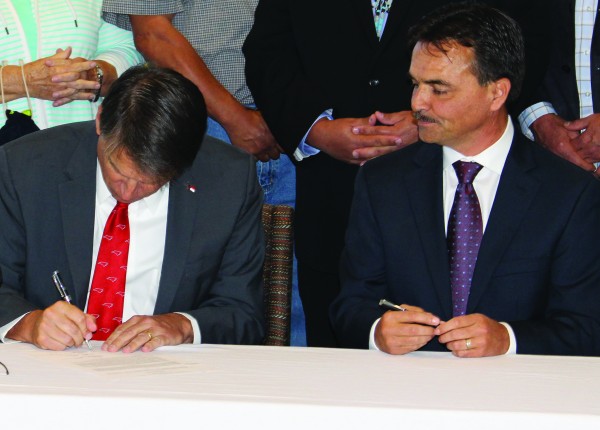 “This is an important and historical day for the Eastern Band of Cherokee Indians and the state of North Carolina. Our state and our administration are proud that our diverse and rich Native American heritage is part of why nothing compares to North Carolina – from the coast to this beautiful view in the mountains that the hospital architecture takes so advantage of.”

He added, “More than 122,000 Native Americans call North Carolina home, and this makes our state the largest Native American population east of the Mississippi River and the eighth largest Native American population in the United States. We are proud of this heritage and respect the traditions of sovereignty of our Native American neighbors. And, that is why I am proud to sign House Bill 850 into law today. This bill is an important step and verifies the rights granted to the Eastern Band of Cherokee Indians close to three decades in 1987. House Bill 850 authorizes the Eastern Band of Cherokee Indians to establish the following: first, a police department; second, a tribal alcohol law enforcement division; third, a natural resources law enforcement agency; and fourth, a probation and parole agency through the Cherokee Marshal’s Office. It will help our state.  It will help the Eastern Band of Cherokee Indians protect people, protect our environment and uphold the law. Under this bill and previous guidelines, the chief law enforcement officers of the police department must comply with the training and standards for the police officers in state of North Carolina. The Cherokee Marshal’s Office is authorized to have access to all probation and parole records of the North Carolina Department of Public Safety to the same extent as a probation or post release supervision office of the Department of Public Safety for any individual over which the Cherokee Tribal Courts have jurisdiction to try and impose a sentence upon. This also grants full faith and credit to any limited driving privilege signed or issued by a judge or justice of the Cherokee tribal courts and filed with that court.”

With that, the Governor signed the bill. The Governor thanked a number of local legislators for working to ensure that the bill became law including: Representatives Roger West, Mike Hagar and Michelle Presnell, and NC Senator Jim Davis. According to the Governor, this bill formalizes a relationship between the Eastern Band of Cherokee Indians and state of North Carolina by state statute.

At the close of the activities, the Governor recognized Casey Cooper. “Casey, I just want to let you know that I am so impressed with you and to have been raised here, and to come back home…get a great education at Garner-Webb and UNC Chapel Hill and to come back home to build I think a masterpiece.”

Chief Lambert also introduced Gov. McCrory to Dike Sneed, the new Cherokee Police Chief, and stated that Police Chief Sneed is “in charge of what this bill is all about”. The Governor thanked him for being part of the team and reiterated that this bill has formalized the relationship between state and tribal law enforcement.

To view or purchase photos from this event, visit: https://onefeather.smugmug.com/2015-Community-Events-and-News/Governor-McCrory-visits/