FOOTBALL: Braves air it out in loss at Andrews 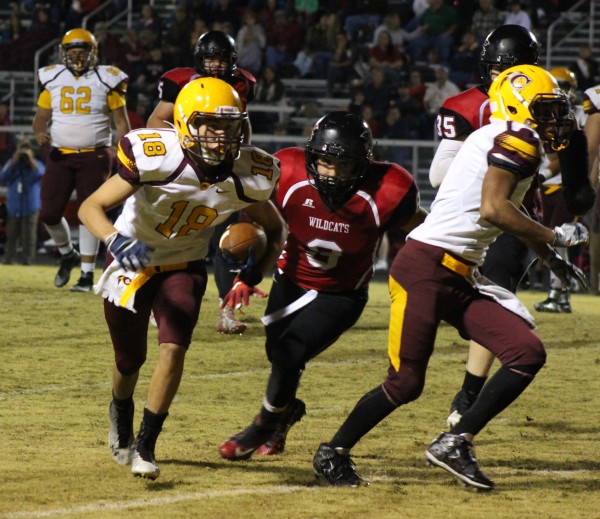 Cherokee’s Anthony Toineeta (#18) runs by Andrews’ Grayson Parker (#8) on his way to a touchdown in the second half of Friday’s game at Andrews. On the night, Toineeta caught four passes for 69 yards and two touchdowns. (SCOTT MCKIE B.P./One Feather photos)

ANDREWS – The Cherokee Braves (3-6) put on an air assault at Andrews (4-6) on Friday, Oct. 23, but turnovers and missed extra points were costly as they lost to the Wildcats 41-30.  Tye Mintz, Braves sophomore quarterback, had a career night completing 15 of 23 passes for 286 yards, four touchdowns and four interceptions.

The Braves fell behind by 23 at one point, but did not quit and scored the last two to make it a game at the end.  Kent Briggs, Braves head coach, commented after the game, “They fought hard.  Obviously, there were some things we didn’t do well enough.  What we need to do is stay positive and work to get better.  That’s what we’ll do this week.  We have two games left this season, and we need to put ourselves in the best opportunity for the playoffs.”

The Braves started their first possession from their own 32-yard line.  Six plays into the drive, Andrews’ Taylor Parker intercepted the ball at the Wildcats 43-yard line.

But, their drive didn’t last long as they would fumble on the first play and Joaquin Layno, Braves defensive lineman, scooped it up and ran 42 yards for the first score of the game.  The two-point try failed and Cherokee led 6-0 at the 10:14 mark of the first quarter.

Andrews started their next drive at their own 36-yard line and 10 plays later, James Hoke caught a 6-yard touchdown pass from Parker.  Cameron Debty added the point-after kick and the Wildcats took a one-point lead (7-6) with just less than six minutes left in the first. 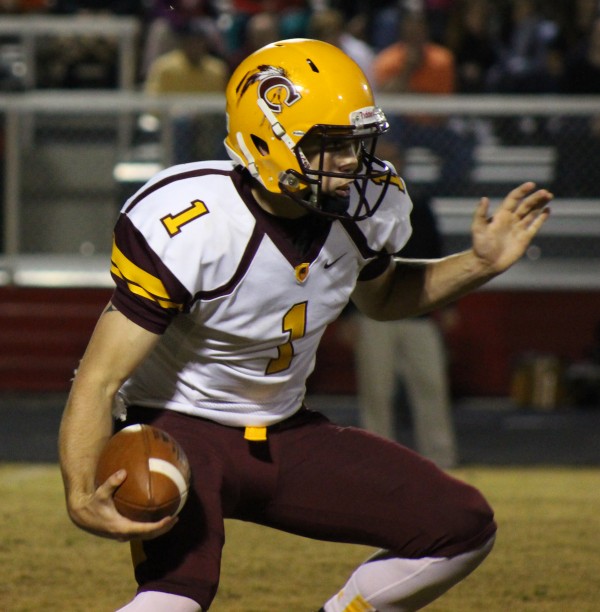 Tye Mintz, Braves sophomore quarterback, avoids the rush in the first half. He completed 15 of 23 yards for 286 yards, four touchdowns and four interceptions.

The Braves fumbled on the second play of their next drive which was recovered by Andrews’ Willie Parker at the Braves 22-yard line.  Two plays later, Dylan “Cornbread” Ward ran 19 yards for the score.  Debty added the extra point and Andrews led 14-6 with 4:19 left in the first.  On the night, Ward carried the ball 43 times for 185 yards and three touchdowns.

Cherokee kept plugging and after starting on their own 34-yard line put together a nine-play drive which culminated in Mintz hitting Toineeta on a 15-yard touchdown pass.  The two-point try failed and Cherokee only trailed by two (14-12) with 27 ticks left in the high-scoring first quarter.

The Wildcats came back on their next possession and put together a nine-play, 65-yard drive that yielded a score as Parker hit Tyler Rose on a 10-yard touchdown pass.  The extra point was no good and Andrews led 20-12 with 8:25 left in the half.

The Braves next possession ended on the third play as Andrews’ Rose intercepted the ball at the Wildcats 44-yard line.  Thirteen plays and six minutes later, Parker ran for a two-yard score.  Debty added the extra point and the Wildcats extended their lead to 27-12 with 56 seconds left.

Cherokee got the ball back, but Parker ended the drive with an interception at the Wildcats 2-yard line to end the half.

Both teams played strong defense coming out of the locker room.  Following punts by both teams, Andrews set up shop for their second possession of the half at the Braves 44-yard line.  Eight plays later, Ward scored on an 8-yard run.  Jack Newton caught a Parker pass for the two-point conversion and Andrews led 35-12 with 4:55 left in the third.

Cherokee started their next possession on their own 35-yard line and would strike back quickly.  Following a five-yard penalty that backed things up to the 30, McMillan caught a 62-yard pass from Mintz which set up a first and goal at the Andrews 8-yard line.  Three plays later, the two connected again on a 7-yard touchdown pass.  The two point try failed and Andrews led 35-18 at the 3:47 mark of the third.

The Braves forced Andrews to punt on their next possession and an interception by Rose ended Cherokee’s next drive.  The Wildcats started their next drive at the Cherokee 37-yard line and scored 10 plays later as Ward would run in from two yards out.  The point-after kick failed and Andrews led 41-18 with 6:01 left in the game.

Cherokee kept plugging and after starting at their own 28-yard line, put together a quick 4-play drive that ended with Mintz connecting with Toineeta on an 18-yard touchdown pass.  The two-point try failed and Cherokee cut into the lead at 41-24 with 4:36 left in the fourth.

The Braves defense held the Wildcats to a three-and-out and forced a punt.  Cherokee took over in good field position at their own 48-yard line.  This time, the drive took five plays as Mintz connected with McMillan on an 18-yard touchdown pass.  The two-point try failed and Andrews led 41-30 with 2:15 left in the game.

The Braves tried an onsides kick, but it was recovered by the Wildcats who were able to run out the rest of the clock.

To view or purchase photos from this game, visit: https://onefeather.smugmug.com/SPORTS/FOOTBALL/BRAVES-FOOTBALL-2015/At-Andrews-October-23/i-6HLHm4g