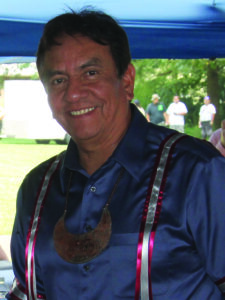 Cherokee Nation Tribal Council Speaker Joe Byrd, shown at the Tri-Council meeting in August, has been elected to serve as vice-president of the eastern Oklahoma region of NCAI. (SCOTT MCKIE B.P./One Feather)

The post was previously held for the past four years by Cherokee Nation Deputy Chief S. Joe Crittenden of Stilwell.

The eastern Oklahoma region is comprised of 20 tribes, and Byrd, drawing no opponents, was elected by acclimation.

“We all know the National Congress of American Indians brings together Native leaders so that we can better speak with a unified voice on issues critical to American Indian and Alaska Native nations and our people,” said Byrd during a speech prior to the election. “The spirit of togetherness and unity is what sets NCAI apart, and I promise I will stand for you, so that we can stand together and accomplish great things in the next two years.”

NCAI is the largest and oldest native advocacy organization in the United States. It is organized as a representative congress of Native Americans and Alaska Natives that serve to develop consensus on national issues that impact tribal sovereignty and considered a priority. American Indian and Alaska Native governments pass resolutions to become members of NCAI, selecting official delegates to the NCAI Executive Council, Mid-Year Conference, and Annual Convention. During these events, delegates consider issues of pressing concern in accordance with their tribal governments’ policies, goals, and needs. NCAI members vote on and pass resolutions relevant to NCAI’s position on a broad range of issues.

“We have an opportunity to continue this critical work and focus on legislation that preserves our cultures and helps our communities grow,” said Byrd. “My heart is always guided by my traditional values, and I’ll work to protect some of our most vulnerable citizens: our proud veterans, our elders and our youth. We have an obligation to those who need us the most.”