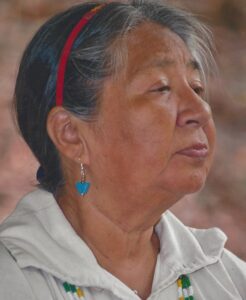 Shirley Jean West Welch, 65, of Cherokee, passed away Tuesday, Oct. 20, 2015 at the Cherokee Indian Hospital with her loving family by her side.

She was born July 11, 1950 in Cherokee to the late Alfred West Sr. and Geneva Wolfe West.

Shirley was employed by the Cherokee Historical Association in “Unto These Hills” and the Oconaluftee Indian Village for many years.  She was also a member of the Qualla Arts and Crafts Co-Op as a finger weaver.  Shirley was a member of Straight Fork Baptist Church where she sang in the choir as she had a great love for singing.

In addition to her parents, Shirley was preceded in death by her husband, Everett Welch; brother, Alfred West Jr.; and sister, Inell West.

Visitation will be held Thursday, Oct. 22 beginning at 5 pm at the Straight Fork Baptist church in the Big Cove Community.  Shirley will remain at the church until the hour of service on Friday, Oct. 23 at 2 pm with Revs. Charles Ray Ball and James “Bo” Parris officiating.  Burial will follow at the Wolfe Cemetery in the Big Cove Community.  Pallbearers will be Conan Tchakarides, J.R. Wolfe, Jeremy Hyatt, Lupe Solis, Gatlin West, Stan Watty, Damian Solis, Travis Hicks, and “Big Al” Taylor.