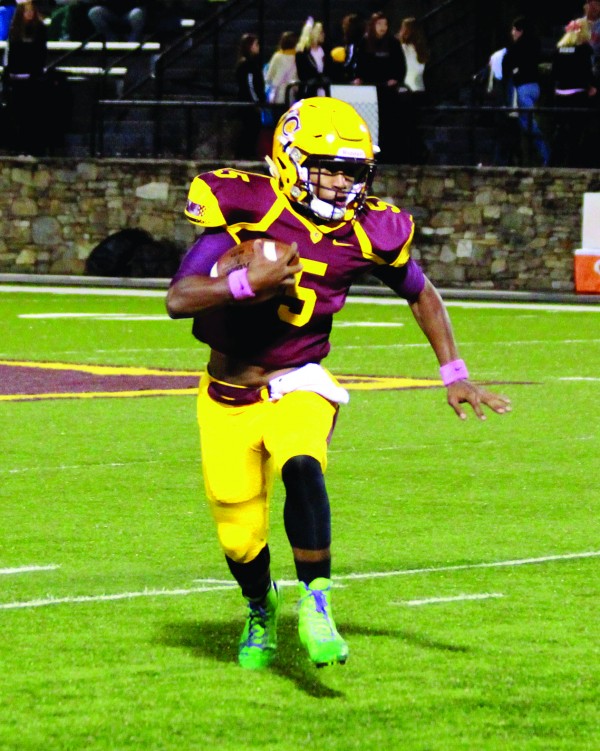 The Cherokee Braves (3-5) fell to the Rosman Tigers on Homecoming Night on Friday, Oct. 16.  The Tigers rushing attack included seven players who rushed for a total of 242 yards and scored three touchdowns in the win over the Braves.

The Braves were led by sophomore quarterback, Tye Mintz, who was 13 of 31 for 120 yards and 3 INT.  Mintz also contributed 15 carries for 87 yards.  Mintz found the hands of Holden Straughan 5-43 and Isaiah Evans 5-42.  The tackling tandem of Logan Teesateskie (19) and Kennan Panther (17) led the Braves defensively.

Cherokee moved the ball deep into Rosman territory on the Brave’s opening drive as freshman running back, Isaiah Evans, found a running lane on the first play of the game to put the Braves in good field position.  Several plays later, Mintz connected with WR Holden Straughan and the Braves were threatening at the 2-yard line.  However, the momentum would be short-lived as the Braves committed a holding penalty and was eventually backed up to the 18-yard line where they would turn the ball over on downs.

Rosman set up on their own 18-yard line but Cherokee’s defense held the usual potent Tiger offense to minimal gains and forced a three-and-out.  After a short punt, Cherokee took over on the 30-yard line when Evans broke loose for a 30-yard touchdown scamper that would be nullified by a holding call.  The Braves continued their drive but were unable to capitalize on the short field and both teams were tied in a stalemate through the first quarter.

Midway through the second quarter, the Tigers were driving downfield when Rosman standout, Landon Shipman, ran the ball for a 12-yard touchdown.  Shipman would carry the ball 10 times for 74-yards during the game.  A failed PAT put the Tigers on top 6-0 at the 3:32 mark of the second quarter.  After a Braves turnover, Rosman drove down the field again when Tanner Whitman flung a 23-yard Hail-Mary pass to Gage Orr in the end zone to put the Tigers ahead.  A 2-point conversion run by Orr put the Tigers ahead 14-0 with 4.7 second left in the half.

Both teams were held scoreless through the third quarter.  A 4-yard touchdown run at the 7:46 mark by Gage Orr and a PAT by Manny Suarez put the Tigers ahead 21-0 at the 7:46 mark in the fourth quarter which would be the final score.

The Braves will travel to Andrews for their next conference showdown on Friday, Oct. 23 at 7:30pm.

To view or purchase photos from this game, visit: https://onefeather.smugmug.com/SPORTS/FOOTBALL/BRAVES-FOOTBALL-2015/Vs-Rosman-October-16/