OSSINING, NY – An inmate at Sing-Sing Correctional Facility in Ossining, New York claims Cherokee blood and has filed a lawsuit seeking to become a member of the Eastern Band of Cherokee Indians.  Robert Sioleski, serving a 24-year sentence on a 1st Degree Assault conviction for throwing acid on his step-daughter, filed a Complaint under the Civil Rights Act in U.S. District Court Southern District of New York on Friday, Oct. 2 seeking a judge to compel the tribe to make him a member.

Sioleski, 58, claims he wants to become a tribal member so he can participate in American Indian ceremonies in prison.  He entered prison on June 6, 2003 and his earliest release date is Aug. 15, 2023.

He claims in his Complaint, “Asked Tribal Council about blood quantum test for tribal enrollment and that I could not afford full price of said test, but willing to make payments.  They, the tribe, 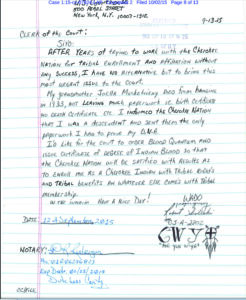 Copy of a letter filed with Sioleski’s Complaint

did not answer and cut off communication with me.  I’m a Cherokee descendant and want my tribal enrollment with tribal rights and benefits with a good standing with the tribe so I can attend Native services while incarcerated!  I want my birth rights as Native descendant.”

Sioleski also states that he has received disciplinary action in prison for his “Native American Hairstyle – Tribal Mullet” which he wishes to keep.

The EBCI Enrollment Office deferred comment due to the possible legal action and Hannah Smith, EBCI attorney general, related that her office has not received any notice of service on this action.

In his Complaint, Sioleski requests the following relief from the Court, “Contact Cherokee and have the court order blood quantum test and also Certification of Degree of Indian Blood (CDIB) once test confirm tribal affiliation and which clan my family comes from, so I can be excepted (sic) into tribe with all tribal rights and benefits!  And, be able to attend Native services, festivals, buy and smudge herbs etc. Legally!”

In a letter dated Sept. 15, Sioleski writes, “After years of trying to work with the Cherokee Nation for tribal enrollment and affiliation without any success, I have no alternative but to bring this most urgent issue to the Court.”

The letter states he worked with the Cherokee Nation, but his complaint is to the Eastern Band of Cherokee Indians.  He claims that his grandmother, who died from hanging in 1933, was a Cherokee.