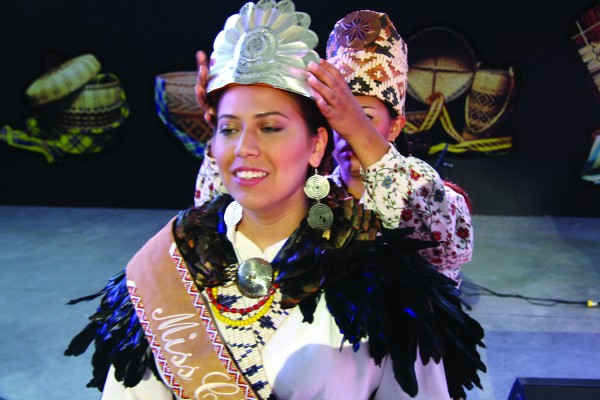 Miss Cherokee 2014 Taylor Wilnoty crowns Taran Swimmer the 2015 Miss Cherokee at the Cherokee Indian Fairgrounds on Saturday, Oct. 10. Swimmer was named 1st runner-up in the pageant held on Oct. 3, but a scoring discreprency was discovered and the crown and title were given to her on Oct. 10. (SCOTT MCKIE B.P./One Feather photos)

Due to an error in the tabulations of scores, the 2015 Miss Cherokee crown has switched heads.  Amorie Gunter was crowned and named the winner of the annual pageant held at the Chief Joyce Dugan Cultural Arts Center on Saturday, Oct. 3, and exactly one week later, Taran Swimmer, named first runner-up in the pageant, received the crown at the Cherokee Indian Fairgrounds on Saturday, Oct. 10.

According to the statement, the Royalty Board informed Swimmer and Gunter and their families of the situation and a Special Board meeting was held with them and the Royalty Board on Oct. 8.  “All results were taken to the Finance Office on Oct. 8 and were verified and certified by two independent certifiers.”

The Royalty Board provided the following new scores which they said were recounted four times and certified twice: Taran Swimmer 280.5 points and Amorie Gunter 271 points.

According to the original score sheets, Swimmer garnered the following scores:

The Royalty Board also said in their statement, “We acknowledge that this discrepancy has caused a lot of heartache and pain, but tonight we must crown the rightful winner.  The Royalty Board requests that our Tribe demonstrate the unity for which it is known by supporting these two extraordinary Cherokee women.”

Following her crowning on Oct. 10, Swimmer commented, “It’s very conflicting given the situation.  I’m proud of how I did in the pageant, and I wish it didn’t have to happen like this.”

Gunter is upset at the entire situation.  “There is no way any of this is right and everyone knows it.  I was crowned the night of the pageant, signed a contract the next day, attended several events and spoke at them all.  Then, five days later, they find out I didn’t actually win, and it just so happens to be on the same day everyone comes down to the Council House upset because my uncle, (Chief) Patrick Lambert, started reorganization.”

She went on to say, “They stripped me of my crown and dignity, and there are absolutely no words that can describe the hurt this has caused me.  A few years back this happened with Little Miss Cherokee, but it was caught the very next day, and they were both made to share the crown because they couldn’t hurt that little girl.  I guess because I am 20 years old they didn’t think it would hurt me.” 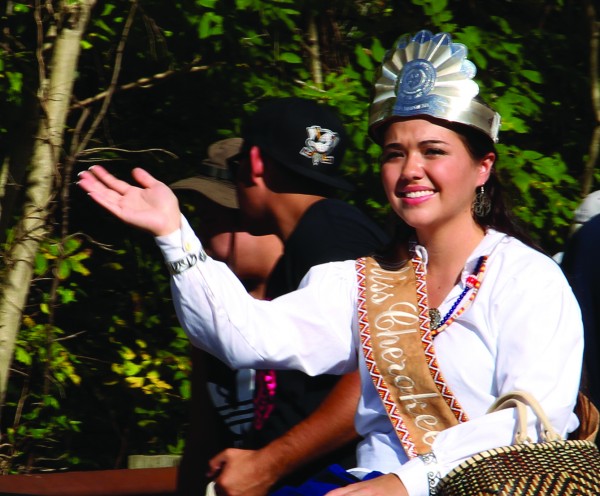 Amorie Gunter, named Miss Cherokee at the Oct. 3 pageant, waves to the crowd during the Cherokee Indian Fair Parade on Oct. 6. Prior to having her crown and title taken several days later due to a scoring mistake, she participated in several events throughout the week at the Fair as Miss Cherokee.

Gunter said that when she left the meeting on Oct. 8 that an agreement had been made to share the crown.  “Then, Friday morning it all changed, and I was demanded to bring everything back and was treated with little respect because I was upset about what was happening to me.”

She added, “Whether this was a true mistake or something brought upon me to hurt my family, no one will ever know, but, I would like to say thank you to everyone who has supported me from the beginning.”

The statement concluded, “The Miss Cherokee Royalty Board has accepted Miss Taran Swimmer’s decision to assume her rightful place as Miss Cherokee 2015, and we support her and will act in her best interest.”

In a statement on Oct. 11, the day after her crowning, Swimmer said she was called into the Oct. 8 meeting and was told, at that point, of the mistake, shown the score sheets and was told that she was the actual winner.  “I could see how hurtful this news was to Ms. Gunter and my heart broke for her.  I did not understand how this could have happened, and I still do not understand, but just know that it was a human mistake.  It was discussed at this meeting that the title of Miss Cherokee be shared between us, but Ms. Gunter and myself were encouraged to not make any hasty decisions and to give it some thought.”

Swimmer went on to say, “After a lot of prayer and discussion with my mother, I decided to accept the title of 2015 Miss Cherokee.  My mother and I felt the right thing to do was to meet with Ms. Gunter and her mother to let them know my decision….my mother and I told the Gunters of my decision and also told them that we would understand if there were hard feelings.  This whole situation was neither Ms. Gunter’s fault nor mine.  After the meeting with the Gunters, I then met with Mrs. Conseen and Mrs. Shuler to let them know that I would be accepting the title of 2015 Miss Cherokee because my actions sets a precedent for future Miss Cherokees.”

She concluded by saying, “I am so sorry for all of the hurt and heartache that Ms. Gunter has had to endure, and I am praying for her family that God will send his strength and peace to their hearts.”

The Royalty Board, which is a volunteer organization that is separate and independent from the other EBCI Pageant Boards, related they wanted to stress that Gunter did not do anything wrong nor did she violate the agreement she signed, but the Board did point to the last sentence of the 2015 Tribal Royalty Pageant Agreement which states, “I understand and agree that the decisions made by the Royalty Board are final.”