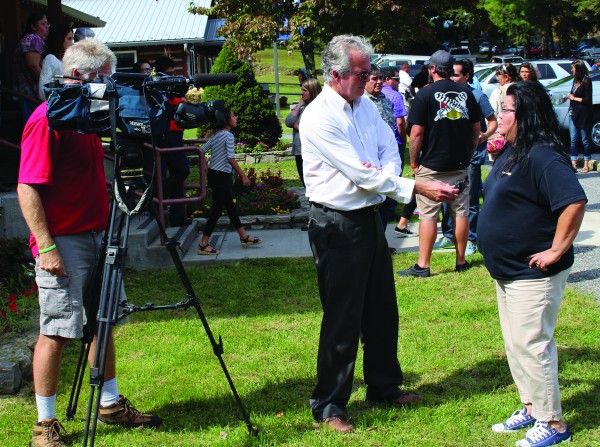 The Tribal Council convened in an emotional session on Thursday, Oct. 8 as a result of multiple contacts from employees who reportedly received letters of either dismissal or transfer from tribal government jobs the previous day.

According to personnel in the council house, the session began just after 8:30am. The Tribal Council began to hear the concerns about letters that were delivered to employees from the office of Principal Chief Patrick Lambert. The letters were delivered by members of the Cherokee Police Department on Tuesday, Oct. 6.

Chief Lambert stated that he reviewed his actions with the EBCI Human Resources Department and had reviewed them from a legal standpoint. He feels that all actions taken were appropriately and lawfully executed. He said that any employees receiving letters were getting them because of issues with their performance and he did not feel like it would be appropriate to discuss individual employee conduct in a public forum. He offered to meet with each person receiving letters for one-on-one discussion.

Chief Lambert stated that all employees who received letters of dismissal were “deputy level positions”.

“There have been eight people who have been transferred to other positions, but they are still employed,” said Chief Lambert.  “So, the outcry that is happening is from those people. I have text messages that says that they have stepped on people long enough. I got elected to make change, to make change happen and that is what I fully intend to do…We are going to start being accountable to our people. I have been elected to bring true transparency to the government, and that is what I fully intend to do…There have been some crimes committed, and I fully intend to pursue this, Mr. Chairman, Tribal Council, tribe. This is going to cause a little disruption and we are going to go down that road, and we are going to stand strong and firm in this position because that is what a Principal Chief does. He does not turn a blind eye; does not allow this lack of accountability to go on; doesn’t all these things to take place.”

Tribal Council Chairman Bill Taylor expressed that the Tribal Council does not take the situation lightly. He and the members of Council called the special session to ensure that all employees who were dismissed and transferred were able to have their voices heard and to ensure that they are treated fairly.

Birdtown community member Jason Lambert, who recently received a letter dismissing him from the position of Director of Commerce, was called to the podium by Chairman Taylor. Lambert referenced the Tribal Human Resources Policy, a codified document in the Cherokee Municipal Code.

He specifically noted Chapter 96 Section 5 Subsection 5.06 which speaks to procedures in place regarding those separated from positions for various reasons, including personnel restructuring. Lambert specifically discussed the portions about actions being taken by Executive Committee, defined by the Code as Principal Chief and Vice Chief of the Tribe. He also read definitions of “reasonable notice” and the responsibilities to report to Council. He also called attention to a 2008 ordinance (#971) change concerning legislation requiring Tribal Council approve organization chart changes (Municode Chapter 96, Section 4 Subsection 4.33).

Lambert said, “The letter that was delivered to me by Principal Chief Patrick H. Lambert desecrated tribal law and the established processes. There are at least seven points of defiance of this (tribal) law”.

Mollie Grant, who was serving as EBCI Emergency Management program manager, stated that her letter called for her to be transferred into a teacher assistant position, which meant a significant reduction in pay. She and others spoke to the negative impact that this decision is having on them and their families.

Former Chief Hicks spoke to both the letters received by other personnel and to his own letter that came as he reported to the office of the Tribal Gaming Commission. He, too, received a letter, this one from the recently appointed Tribal Gaming Commissioners. The letter advised that his hiring had been reversed and that he would not be needed for the Executive Director position.

He said that, while it is not unusual for personnel changes to be made when the Executive Office holders change, he feels that this was the wrong way to do it. He said, “This is no way to do tribal business. This is not the Cherokee way”.

Chairman Taylor indicated that more discussion would be needed and potentially some legal review and advice for the Tribal Council would be sought.

Cherokee County/Snowbird Rep. Brandon Jones stated that he was not aware this action was going to be taken and that he felt that the effected employees should be treated with “respect and restored”.

Yellowhill Rep. Anita Lossiah requested copies of the letters that the employees received and Yellowhill Rep. B. Ensley affirmed the need to get legal review of the personnel policy, code and actions as they relate to this situation.