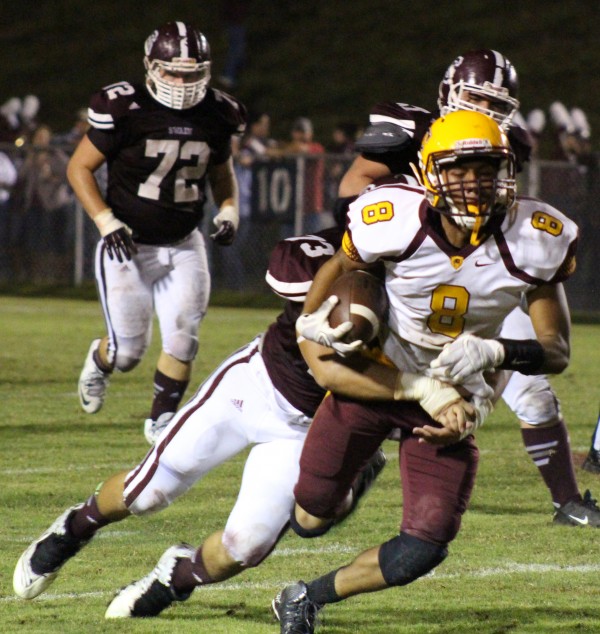 Cherokee’s Jason McMillan (#8) fights for yardage after a catch in the first half of Friday’s game at Swain. On the night, he had four catches for 55 yards. (SCOTT MCKIE B.P./One Feather)

BRYSON CITY – The Cherokee Braves (3-4) fought the Maroon Devils and eventually the elements as they traveled to Swain on Friday, Oct. 9.  Swain gained 214 yards on the ground and scored three first half touchdowns as they went on to a 28-0 victory over Cherokee in a game that was stopped a mere seconds into the fourth quarter due to lightning strikes.

The Braves were led by Tye Mintz, sophomore quarterback, who was 12 of 22 for 120 yards and 1 INT.  He also ran 5 times for 22 yards.  Mintz mixed his targets up throughout the night with four receivers catching balls including: Jason McMillan 4-55, Holden Straughan 3-35, Darius Blanton 3-28 and Isaiah Evans 2-2.

Cherokee went three-and-out on their first possession and was forced to punt.  Swain took over in good field position at their own 41-yard line.  Several Cherokee offsides penalties helped the Maroon Devils on the drive as they had three easy first-down conversions in a row (3rd and 1, 2nd and 1, and 2nd and 1).  The drive culminated with a 3-yard touchdown run by Derek Fortner who carried the ball 18 times on the night for 80 yards and two scores.  Cooper Reinert added the point-after kick and Swain led 7-0 midway through the first quarter.

Cherokee started its next drive at their own 29-yard line.  The Braves put together several first downs in a row on an 18-yard catch by Straughan and a 28-yard catch by McMillan.  Cherokee had a 1st and goal from the Swain 8-yard line, but an unsportsmanlike call on the Braves stalled the drive and they turned it over on downs.

Cherokee turned the ball over on downs on their next possession and Swain took over at their own 45-yard line.  Eight plays later, Fortner ran 7 yards for his second score of the game.  Reinert added the extra point and Swain would take a 21-0 lead into the locker room.

On the first play from scrimmage in the third quarter, Caleb Woodard caught a 59-yard touchdown pass from Kobe Stephenson, his only pass of the game.  Reinert added the extra point and Swain led 28-0 just 27 seconds into the half.

The Braves turned the ball over on downs on their next possession and Swain took over on their own 17-yard line.  Their drive ran out the third quarter, and then several seconds into the fourth quarter, lightning struck near the field and the referees called the game for safety reasons.

The Braves host Rosman on Friday, Oct. 16 at 7:30pm for Homecoming.

To view or purchase photos from this game, visit: https://onefeather.smugmug.com/SPORTS/FOOTBALL/BRAVES-FOOTBALL-2015/At-Swain-October-9/i-4T73FC6