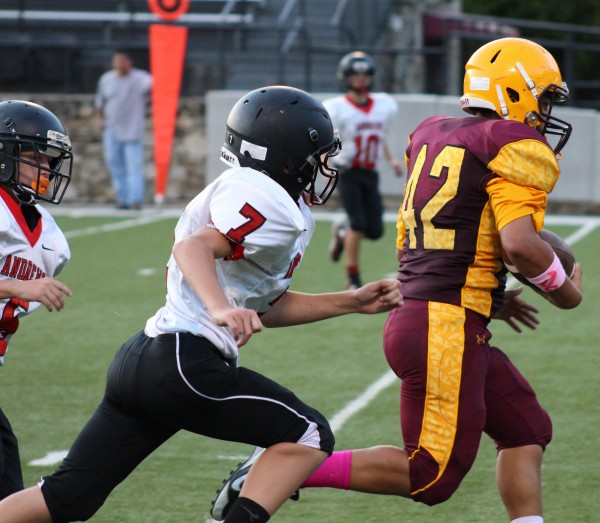 The Cherokee JV Braves (1-5) finished their 2015 season on a high note as they hosted the Andrews JV Wildcats at Ray Kinsland Stadium on Thursday, Oct. 8.  After a slow start by both teams, Cherokee’s offense began to click and they ran away with the game 42-14.

“It was a nice way to end the season,” said JV Braves head coach Chris Mintz.  “These guys have worked hard all year, and I just told them they’re a pleasure to coach.  Not every game has been the way we wanted it to be, but they kept working every day.  We had one of our best weeks of practice this week, and it’s the last week of the season.  They’ve really done well, and I expect good things out of them…they’re a good group of kids.” 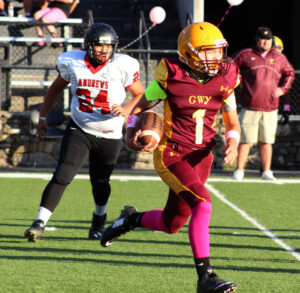 Cade Mintz (#1), JV Braves quarterback, runs hard in the first half. He scored on a 52-yard run in the second quarter.

Neither team was able to move the ball on their first possession and both squads turned the ball over on downs.  On their second possession, Andrews started at the Cherokee 43-yard line with 4:26 left in the first quarter.  A couple of running plays later and the Wildcats found themselves with a 1st and goal at the Cherokee 1-yard line.  A false start penalty backed them up, and then on second down, the Wildcats fumbled the ball which was recovered by an alert Micah Lossiah for the Braves and Cherokee took over at their own 14-yard line.

On the next play, the Braves found pay dirt as quarterback Cade Mintz ran 52 yards for the first score of the ball game.  The two-point play failed and Cherokee led 6-0 at the 8:15 mark of the second quarter.

Andrews turned the ball over on downs on their next possession and Cherokee got excellent field position at the Wildcats 48-yard line.  Three plays later, Wildcatt took off around the end on a 38-yard touchdown run.  Mintz passed to Smith for the two-point conversion and Cherokee extended its lead to 14-0 midway through the second.

Andrews would get back into it pretty quickly though.  Just three plays into their drive, Eric Maennle ran 42 yards for the Wildcats’ first score of the game.  Isaiah Barton added the point-after kick and Cherokee led 14-7 with just less than four minutes left before the half.

The Braves started in excellent field position (Andrews 49-yard line) on their next drive.  Mintz ran 10 yards on first down to the Andrews 39.  Smith then carried the ball 14 yards to the Wildcats 25-yard line which set up a 25-yard touchdown run by Xander Brady on the very next play.  The two-point try failed and Cherokee led 20-7 with 2:41 left in the half.

Neither team could move the ball for the remainder of the half, and Cherokee took their 20-7 lead into the locker room.

Both teams started slowly in the third quarter as the Braves turned the ball over on downs and Andrews punted on the first two possessions of the second half.  Cherokee started their next drive at midfield, and seven plays later, Smith would score on a 26-yard run.  Wildcatt ran for the two-point conversion and Cherokee extended its lead to 28-7 with 1:48 left in the third quarter.

The Wildcats turned the ball over on downs on their next drive, and Cherokee set up shop at their own 45-yard line.  Three plays later, Wildcatt scored his second of the game on a 51-yard run down the sideline. Aniyah Younce ran for the two-point conversion and Cherokee took a 36-7 lead with eight minutes left in the game.

Andrews started at their own 47-yard line on their next drive.  Thirteen plays later, including six inside the Braves 10-yard line, the Wildcats #24 (name unavailable) ran for a score from two yards out.  Barton added the extra point and Andrews trailed 36-14 with three minutes left.

Cherokee wasted no time in getting back into the end zone.  Following a 48-yard return by Younce on the ensuing kickoff, the Braves started at the Andrews 22-yard line.  Three plays later, Tanner Howell ran in from one yard out for the touchdown.  The two-point play failed and Cherokee led 42-14 with 2:10 left in the game.

Andrews’ next drive lasted three plays as Wildcatt ended it with an interception at the Wildcat’s 21-yard line.  Cherokee took a knee to end the game at 42-14.

To view or purchase photos from this game, visit: https://onefeather.smugmug.com/SPORTS/FOOTBALL/JV-BRAVES-FOOTBALL-2015/Vs-Andrews-October-8/i-KHVjqBC