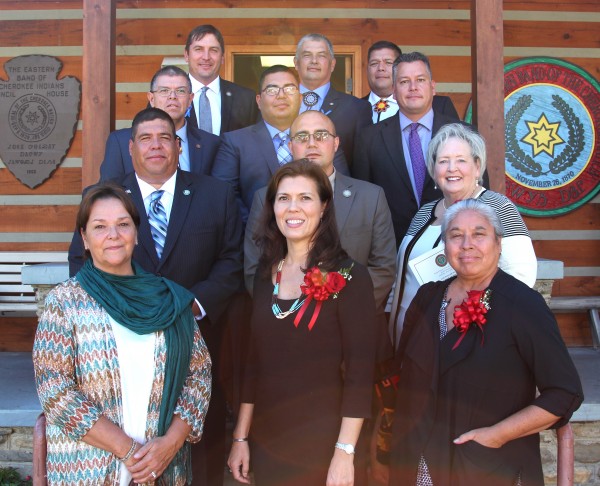 The 2015-2016 Tribal Council took their seats for the first time in active session on Monday, Oct. 5 and wasted no time in approving six resolutions on various topics from appointees to the Tribal Gaming Commission to the drafting of a Tribal Constitution.

Principal Chief Patrick Lambert immediately presented five separate pieces of legislation to be considered by Tribal Council in their first session. His first proposed resolution was to provide him the direction to complete a Tribal Constitution for the Eastern Band of Cherokee Indian. 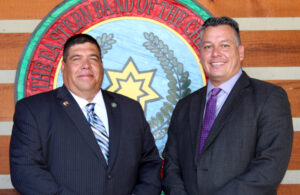 Birdtown Rep. Travis Smith motioned for approval and Birdtown Rep. Albert Rose seconded the motion. It was amended to state that a draft of a constitution will be presented to the Tribal Council and people within six months of ratification of the legislation. The Tribal Council passed the resolution unanimously.

The second resolution submitted by Chief Lambert involved the tribal employee 401 (k) Plan match. In 2008, the match amount was reduced as a result of a national recession. The 401 (k) Plan allows employees to contribute to their retirement. The tribal government incentivizes employees to contribute by matching their contributions, currently up to 3 percent (prior to 2008, the match amount had been 5 percent). This resolution proposes a return to the 5 percent match. Rep. Smith motioned for approval and Wolftown Rep. Bo Crowe seconded. Tribal Council passed unanimously.

Resolution number three concerned the taking of a tribal census. The resolution noted that no tribal census has been taken since 1991. One of the functions of the census is to count the number of EBCI tribal members in each voting community to determine the percentage weight that each Council member’s vote will carry as they vote on legislation.

This resolution states that “the Principal Chief shall take such actions as necessary to implement this resolution pursuant to the dictates of the Charter and Governing Document section 19 and the Cherokee Code section 117 and shall conduct a tribal census, collecting data substantially similar to that collected by the United States Census Bureau in its decennial census”.

The fourth resolution submitted by Chief Lambert addressed the Tribal Gaming Commission’s recent activities with regard to the selection of an executive director.

Chief Lambert explains in the resolution that he feels that those managing the tribe’s gaming must not even have the “appearance of impropriety”. He also says that the operations and management of tribal gaming must be handled with integrity and to the betterment of the entire tribe.

With this resolution, Chief Lambert called for the removal of all three Tribal Gaming Commissioners including TGC Chairman Donald Rose, Robert Blankenship and Sheila Davis. Rep. McCoy motioned to pass and Rep. Crowe seconded the motion. There were two abstentions and the rest of Council voted in favor.

As the Tribal Council considered the fourth submitted resolution, Chief Lambert addressed the issue of political appointments to tribal boards. “I want to make an offer to Tribal Council on that point. Right now, just in a rough count, not detailing it out, we have over 47 members of different boards, committees and commissions. What I want to come to Council here with soon is a proposal to put all of those together and let’s reform how we do our outside boards and commissions; and I believe we can narrow that scope down and I think we could have a huge amount of savings and (reduce) costs in our boards and commissions.”

Chief Lambert related that he feels that there cannot be a lapse in leadership at the TGC and he feels that these individuals are qualified and have had the proper background checks. He mentioned a third candidate, but said he would not bring the name to Tribal Council for consideration until the proper review had been completed. The nominees were considered separately.

Yellowhill Rep. Alan “B” Ensley moved to pass the resolution and Rep. McCoy seconded the move to approve Saunooke’s appointment.  The vote was unanimously in favor. The vote to approve McCoy’s appointment was motioned by Rep. Ensley and seconded by Big Cove Rep. Richard French. There were two abstentions due to family relationships with the candidate and the rest of the council voted in favor.

The Council concluded with a “deemed tabled and read” of an ordinance amendment of Ordinance 768. A copy of the amendment reads that an amendment to Section 18B-112 (b) and (d) will be considered. Section 18B-112 defines Tribal Alcohol Beverage Control in the Tribal Code.