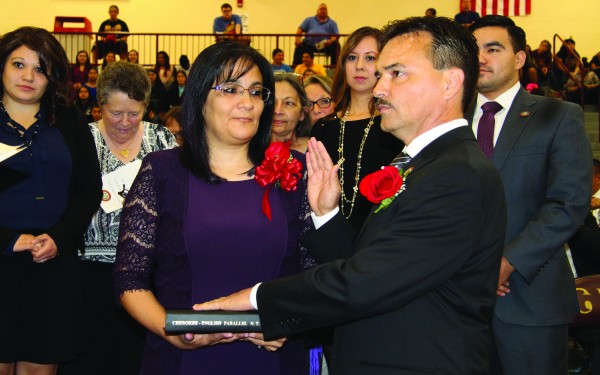 Surrounded by his family and with First Lady Cyndi Lambert holding a Bible for him, Principal Chief Patrick Lambert takes the Oath of Office during an Inauguration Ceremony on Monday, Oct. 5 in the Charles George Memorial Arena. (SCOTT MCKIE B.P./One Feather photos)

Patrick Lambert became the 27th Principal Chief of the Eastern Band of Cherokee Indians during an Inauguration Ceremony held at the Charles George Memorial Arena on Monday, Oct. 3.  Richie Sneed took the Oath of Office as Vice Chief along with 12 Tribal Council representatives and three Cherokee School Board members.

“This milestone today would not have been possible without the strength and resilience of our Cherokee women,” said Principal Chief Lambert in his Inaugural Address.  “My mom is one of those quiet heroes who always does for others and never asks for anything in return.  It’s from her character that I grew to become the man that I am today.” 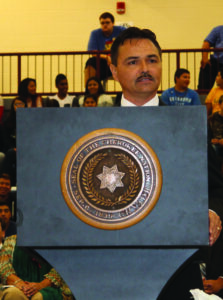 “The Oath I just took is a solemn pledge to do everything in my power to protect the tribe and all of its members,” said Chief Lambert.  “This Oath is not just words to me, but it’s an honorable promise.”

“We are Cherokee, the same blood runs through all of us…we are strong, resilient, purposeful, passionate, understanding, and patient.  We believe our decisions reflect on our people, and we should always strive to do those things which make all of our members proud.  We should be truthful and honest at all times and take responsibility for our actions.”

Chief Lambert said he hopes to change the thinking surrounding tribal government.  “We have learned that more does not always equate to being better; that even our great tribe has recognized limits.”

“This Inauguration marks a new beginning, a new dedication from our government and a new spirit among us all.”

“You have given me a great responsibility, and I intend to stay close to you, to be worthy of you, and to exemplify what you are.  Let us create together a new tribal spirit of trust.  Your strength can compensate for my weakness.  Your wisdom can help to minimize and void my mistakes.”

He concluded by saying, “My fellow tribal members, this is our time.  Let us embrace it.”

Vice Chief Sneed commented during his Inaugural Address, “I am humbled to stand before you and have the opportunity to serve as your next Vice Chief.  No one stands alone in their accomplishments.”

He thanked his family for their support and encouragement over the years.  “I look forward to the future with great hope.  I recognize that we have a great deal of work before us, some of which will not always be easy.  But, our people have never taken the easy road.” 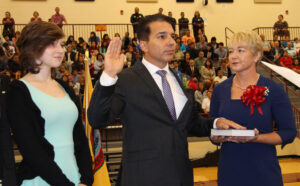 Vice Chief Sneed said the Cherokee people have always overcome adversity.  “Our ancestors stood strong in the face of adversity and against insurmountable odds, and we stand today because they chose not to surrender…it is my intention to continue this proud tradition of perseverance.”

In speaking to the youth of the tribe, he commented, “I know it may seem a long way off, but trust me, adulthood comes quickly and is passes by even more quickly.  Do not squander your youth with short-sighted choices.  Dream big, set goals, and never surrender when adversity comes.”

Along with Chief Lambert and Vice Chief Sneed, the following Tribal Council representatives took their Oath of Office during Monday’s program:

Three Cherokee School Board members also took their Oath of Office including:

Monday’s program was opened with the posting of the colors by the Steve Youngdeer American Legion Post 143.  That was followed by the singing of the National Anthem by Jake Sneed and the recitation of the Pledge of Allegiance led by Warren Dupree.  The New Kituwah Academy Singers then sung the Cherokee National Anthem.

Musical presentations were given throughout the morning’s program by the Old Antioch Church Singers, Regina Swimmer, Barbara Waldroup, and flautist Matthew Tooni.

To view or purchase photos from this event, visit: https://onefeather.smugmug.com/EBCI-Inauguration-October-5/