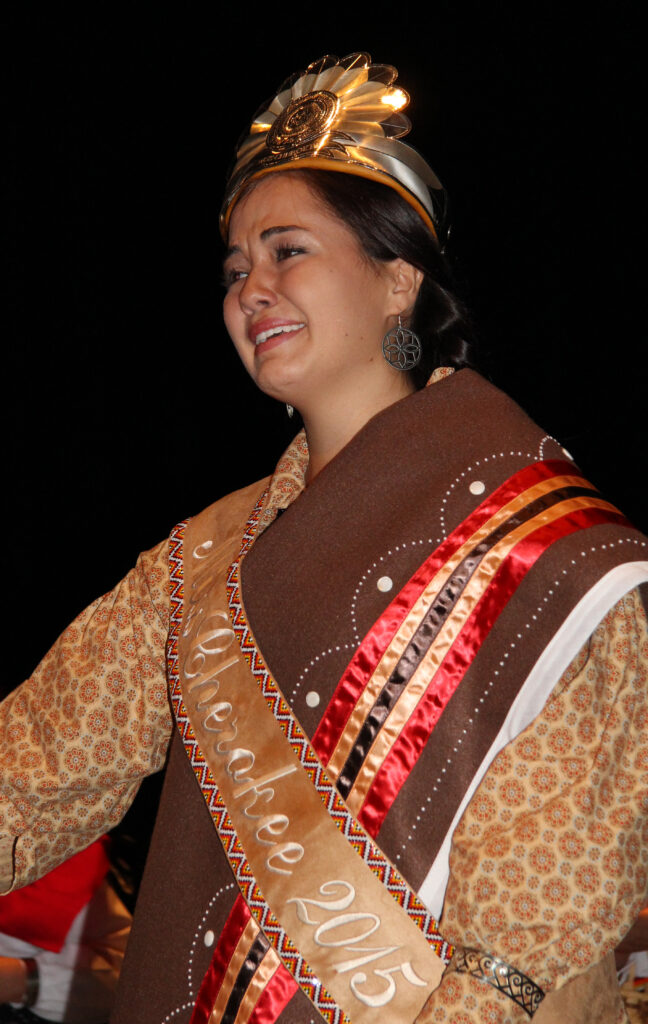 It was raining outside, but the smiles inside lit up the Chief Joyce Dugan Cultural Arts Center as the annual Miss Cherokee pageant was held on the evening of Saturday, Oct. 3.  Amorie Gunter, a 20-year-old student at Southwestern Community College (SCC), was chosen as the 2015 Miss Cherokee and Taran Swimmer, a 19-year-old student at Western Carolina University, was chosen as the 1st Runner-Up.

The pageant contestants were judged in several areas including: personal interview, casual wear, traditional dress, traditional talent, and public speaking.  Gunter and Swimmer were joined in the pageant by Shelby Parker, a 22-year-old recent graduate of Furman University, and Caressa Jackson, a 20-year-old student at SCC.

Each contestant chose and spoke on a platform that they wished to accomplish if chosen as Miss Cherokee.  Gunter spoke about the need for pediatric brain tumor awareness.  “It is near and dear to my heart,” she told the crowd explaining that her brother was diagnosed with a tumor at age 5. 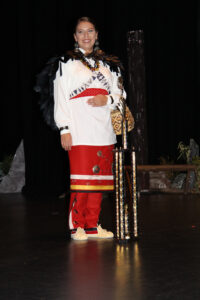 Taran Swimmer was named the 1st Runner-Up in the pageant.

Gunter said her brother is now 21-years-old and has been in remission since 2001.  “No brain tumor is a good one.  Some people die from benign ones as well as malignant ones.  It is a terrible disease no matter what type you have.”  She added, “Every child deserves a chance at life.”

Swimmer spoke about high school drop-out prevention.  “Every year, over 1.2 million students drop out of high school in the U.S. alone.”  She said it is important for parents and members of the community to look for the warning signs in teens that could lead to them dropping out of school such as: class disruption, social withdrawal, as well as attendance and performance issues.

“Schools can’t do it by themselves.  They need the help of parents, guardians and the community.”

Parker spoke about the Movement Project and the need for Cherokee youth to be active.  “It starts with small changes.  If we can create healthy kids, then we can create a healthy future.”

During the talent portion of the evening, each contestant demonstrated a traditional Cherokee song, dance or craft.  Gunter performed the Cherokee Running Dance while Swimmer sang “Orphan Child”, a Trail of Tears-era song, as she was accompanied by former Little Miss Cherokee Tah-Tah-Yeh Swimmer.

Prior to the crowning, Miss Cherokee 2014 Taylor Wilnoty gave her farewell presentation which included a video highlighting her reign as well as a giveaway to those who helped her out throughout the year.  “I want to thank you all for an amazing year.”

To view or purchase photos from this event, visit: https://onefeather.smugmug.com/2015-Community-Events-and-News/Miss-Cherokee-pageant-October/