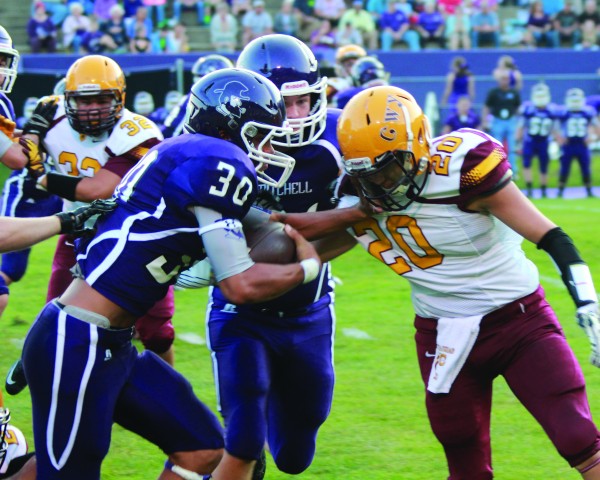 BAKERSVILLE – The Braves (1-1) came up short against the veteran Mitchell Mountaineers at Memorial Stadium in Bakersville on Friday, Aug. 28 by the score of 49-7.

“We didn’t get ourselves into position to win a football game,” said Braves Head Coach Kent Briggs.  “Mitchell is a good football team, but we made them look better than they probably are.  We have a lot of things we need to improve and we’ll start on Monday.”

The Braves found themselves in an early deficit as Braxton Tehandon from the Mountaineers capped off their opening drive with a 14-yard touchdown run early in the first quarter.  After a stalled Cherokee drive, the Mountaineers found the end zone once again with a Dalton Beaver 23-yard rushing touchdown to put the Mitchell up 13-0 at the 7:39 mark in the first quarter.  The Mountaineers would find the end zone one more time in the opening quarter to take a 20-0 lead to conclude the opening quarter.

Opening the second half, a series of Cherokee penalties would force the Braves to punt from deep in their own territory.  A partially blocked punt would set up a 7-yard punt return by Peyton Green.  The extra point would bring the score to 42-7.  Payton Green from the Mountaineers would add another 7-yard touchdown with a Ben Bonner extra point to bring the game to 49-7.

Offensively, the Braves gained a total of 257 yards including 119 passing by quarterback Tye Mintz who went 9 for 23 with 1 TD and 1 INTs.  He also rushed the ball 10 times for 106 yards.  Kennan Panther rushed 3 times for 16 yards, Jaylen Evans rushed 4 times for 10 yards, and Isaiah Evans rushed 12 times for 6 yards.

Jason McMillan caught 4 passes for 55 yards and a touchdown while Isaiah Evans caught 2 passes for 47 yards.  Other receivers included Darius Blanton with 2 receptions for 9-yards and Holden Straughn with 1 reception for 8-yards.

1A Preseason All-State pick Keenan Panther led the Braves with 13 tackles and Dodge Crowe followed with 10 and 2 sacks.  Tye Mintz also contributed 2 tackles and an interception.

The Braves travel to Philadelphia, Miss. on Friday Sept. 4 for the annual Battle of the Nations against the 0-2 Choctaw Warriors.  Kickoff is scheduled for 8pm.

To view or purchase photos from this game, visit: