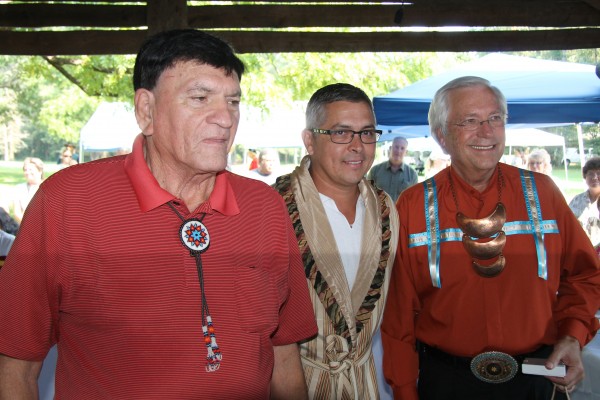 RED CLAY, Tenn. – For the first time since Removal, all three federally-recognized Cherokee tribes met in Council at Red Clay during a meeting on Friday, Aug. 28.  Leaders of the Eastern Band of Cherokee Indians, the Cherokee Nation, and the United Keetoowah Band of Cherokee Indians in Oklahoma met in the Council House at Red Clay State Park, the last seat of government of the Cherokee people before Removal more than 176 years ago. 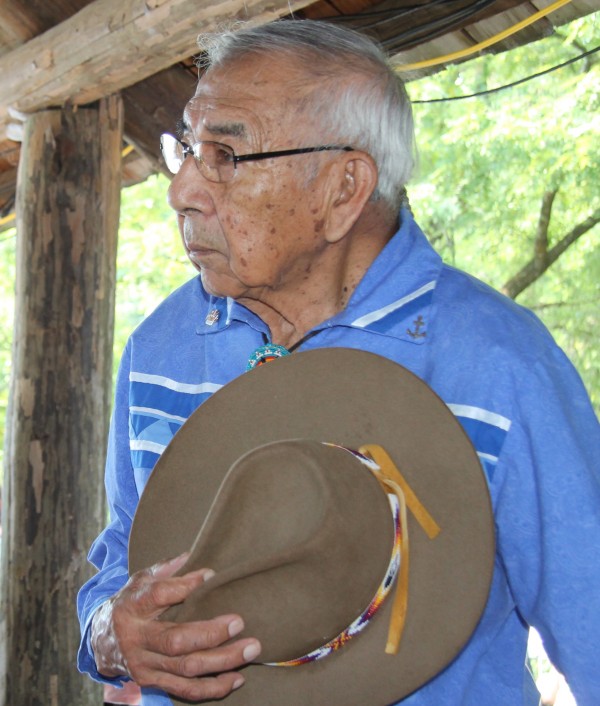 EBCI Beloved Man Jerry Wolfe spoke at the Tri-Council meeting at Red Clay State Park on Friday, Aug. 28. He encouraged everyone to help save the Cherokee language. “Our true identity is our language. We must save our language and teach the youth coming along.”

The day’s events began with the flags of the three tribes being raised while EBCI tribal member Ric Bird sang a flag song.  The EBCI flag was raised by former Vice Chief Pee Wee Crowe along with his son, Wolfetown Rep. Bo Crowe, and Tribal Council Chairwoman Terri Henry.

Preservation of the Cherokee language and syllabary, food sovereignty, hunting and fishing rights, and authenticating Cherokee educational presenters were a few of the topics tackled in the meeting.

“All three tribes are here today,” said Joe Byrd, Speaker of the Tribal Council of the Cherokee Nation.  “It means a little bit of grief, but it means a whole lot of happiness.  No matter what happened in the past, we have our faith, we still have our spirit and we have our sovereignty.”

EBCI Beloved Man Jerry Wolfe gave an impassioned talk about the importance of the Cherokee language.  “Our true identity is our language.  We must save our language and teach the youth coming along.  When a child is learning to speak, never make fun of them.”

Principal Chief Michell Hicks commented on the meeting, “We are blessed to be here with our Cherokee brothers.  When you come to this land, just like at Kituwah, there’s always a tranquility about it, there’s a peace.”

He praised former Tribal Council Chairman Dan McCoy for having the idea of a Tri-Council meeting back in 2007.  “Dan had a dream of bringing all of our tribes back together as one.  We’re recognized by the federal government as three separate tribes, but we’re one people.  We all come from one blood.”

Cherokee Nation Principal Chief Bill John Baker said, “It’s a beautiful day to come back to 176 years later.  This very spot is where our ancestors learned of the Treaty of New Echota.  It was the place where John Ross announced that the Removal would take place.”

“The best days of the Cherokees are not behind us,” he added.  “176 years later, we’re stronger than we’ve ever been.”

UKB Principal Chief George Wickliffe, a fluent Cherokee speaker, noted, “We are a tribe that actually left before you did.  We left in 1817.  We have traveled a long journey.”  He added that 65 percent of his tribe speaks or understands the Cherokee language. 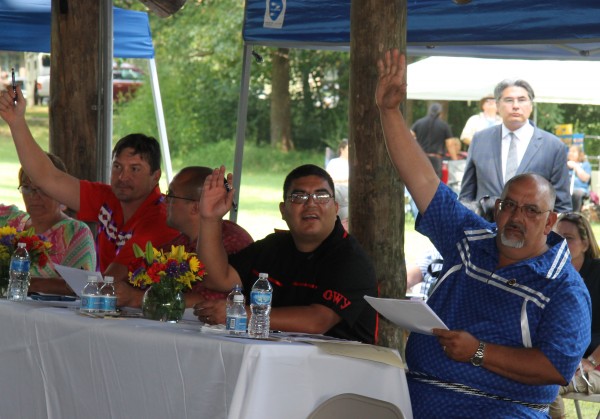 “The Beloved had the ability to dream and envision a better future for the people,” said Rep. Jones who said those given the Beloved title have extraordinary character and morals.

Beloved Woman Myrtle Driver Johnson was excited to announce to the Tri-Council that the children’s classic “Charlotte’s Web” has been translated into the Cherokee language.  “In about a month, it will come out in Cherokee syllabary in a book for our children.  We got permission from the families of E.B. White (author) and illustrator Garth Williams.”

During the business meeting, the Tri-Council brought forth and acted on eight resolutions, passing seven of those.  Several of the resolutions involved rules and procedures for future Tri-Council meetings.  Resolution #1 was passed and recognized the efforts and importance of the Cherokee Language Consortium.

Resolution #6 was passed after an amendment and stated that any future changes to the Cherokee syllabary must be approved and accepted by all three tribes.  During the discussion, several fluent Cherokee speakers asked to leave the syllabary as it has been.

Marie Junaluska, EBCI translator for Tribal Council, commented, “I think what we have today is perfect.  It’s what we learned.  There’s nothing wrong with it, so why change it?”

Resolution #5 supported hunting and fishing rights.  It was tabled at the request of Speaker Byrd who said the Cherokee Nation is still in negotiations with the State of Oklahoma over a compact on the issue.

Chief Wickliffe said in support, “We will fish and we will hunt, and we will defend that.”

Resolution #7 requires the authentication of Cherokee presenters and Resolution #8 states that the three tribes support the idea of food sovereignty and taking an active role in food production and regulation on their tribal lands.  “I think we all are appreciative of the time we have had together today,” Chairwoman Henry said at the end of the meeting.  She called the events of the day “nation-building in the 21st century” and added, “Today, our vision is one that rejects the status-quo and embraces the future.”

To view or purchase photos from this event, visit: https://onefeather.smugmug.com/2015-Community-Events-and-News/Tri-Council-Meeting-at-Red/ 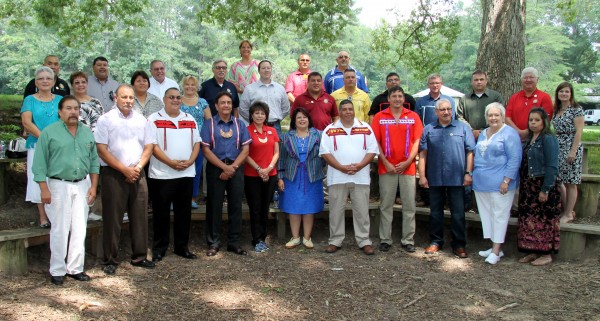 At the conclusion of Friday’s meeting, leaders of the three tribes gathered for a group photo.