Cherokee’s Blake Smith (#15) runs by three Hayesville defenders and breaks a tackle en route to a 5-yard touchdown run in the second quarter. He ended with three rushing touchdowns on the night. (SCOTT MCKIE B.P./One Feather)

Sports fans surely got their money’s worth as the Cherokee JV Braves (0-1) and the Hayesville JV Yellow Jackets combined for a whopping 98 points.  Hayesville came out on top in the high-scoring affair 58-40 in the season opener for the Braves at Ray Kinsland Stadium on Thursday, Aug. 27.

The teams combined for a total of 14 touchdowns in the offense-driven game.  Blake Smith led the Braves with three touchdowns.  Darius Blanton and Cade Mintz each added one score of their own.

“We looked really inexperienced, which we are,” said Chris Mintz, JV Braves head coach.  “We just made way too many mistakes, and we’ve got a lot of corrections.  It’s a good thing that we have an off week.  We’ll go back and work and get ready for it.”

Cherokee started out well in this game.  The Braves took the opening kickoff at their own 45-yard line.  Following a 14-yard run by Blanton and a 23-yard run by Smith, Cherokee found themselves with a 1st and goal on the Hayesville 9-yard line.  Two plays later, Blanton found the end zone on a two-yard run.  The two-point try failed, and Cherokee took an early 6-0 lead at the 7:19 mark in the first quarter.

Hayesville didn’t waste any time getting on the board as they answered Cherokee’s score five plays later as Allen Gillis ran in from five yards out.  Hunter Bryson ran for the two-point conversion, and the Yellow Jackets took an 8-6 lead midway through the first. 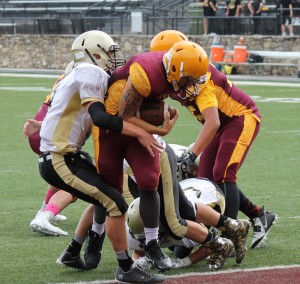 Cherokee’s Darius Blanton (#6) fights for the end zone on a two-yard touchdown run in the first quarter.

The Yellow Jackets got an interception on the Braves next possession and set up shop at their own 32-yard line.  Seven plays later, Tyler Swanger ran five yards for the score.  Peyton Krieger ran for the two-point try to make it 16-6 with 2:10 left in the first quarter.

Cherokee was forced to punt on their next possession following a three-and-out, but they got the ball back quickly as a Hayesville player fumbled the punt reception.  Smith recovered the fumble, and the Braves started again at the Hayesville 42-yard line.  Five plays later, Smith found the end zone again on a 5-yard run.  Mintz made the two-point conversion, but an illegal procedure penalty against the Braves nullified the play.  The next two-point try failed and Hayesville led 16-12 at the 8:34 mark of the second quarter.

The Yellow Jackets scored on their next possession as Bryson caught a 32-yard touchdown pass at the 4:14 mark.  Then, just a minute later, Krieger intercepted a pass and took it 42 yards for the score as Hayesville took a 30-12 lead with just over three minutes left before the half.

The Braves definitely were not done and answered with two quick scores of their own.  Following Hayesville’s last score, Cherokee started at their own 40-yard line.  Five plays later, Smith scored his third of the night on a 16-yard run.  Mintz connected with Sterling Santa-Maria on a two-point pass play to cut into Hayesville’s lead 30-20 with just over one minute left in the half.

Then, Cherokee’s defense got into the scoring act as Xander Brady caused a fumble, picked it up and ran 42 yards for a score.  The two-point try failed and Hayesville took a 30-26 lead into the locker room.

The Braves came out of the locker room firing on all cylinders and put together a seven-play, three minute drive which culminated in a 16-yard run by Smith.  The two-point try was no good and Cherokee took the lead 32-30 at the 7:24 mark of the third quarter.

Hayesville scored two more times in the quarter on a 59-yard touchdown reception by Bryson and a 10-yard run by Gillis, and they took a 44-32 lead into the fourth.

Cherokee turned the ball over on downs on their first possession of the fourth quarter.  Hayesville started on their own 22-yard line and scored three plays later on an 82-yard touchdown pass to #7 (name unavailable).

The Braves kept plugging though.  They started their next possession on their own 38-yard line.  Mintz ran 15 yards on a keeper on first down.  Two plays later, Mintz kept the ball again and after reversing the field ran 47 yards for a score.  Blanton ran for the two-point conversion and Cherokee only trailed by 10 (50-40) with 6:38 left in the ball game.

Both teams turned the ball over on downs on their next possessions, and Hayesville would add one more score in the game as #7 caught a 20-yard touchdown pass.  Gillis added the two-point conversion and the Yellow Jackets would go on to take the win 58-40.

The Braves are idle next week, but are back in action at Robbinsville on Thursday, Sept. 11 at 6pm.

To view or purchase photos from this game, visit: https://onefeather.smugmug.com/SPORTS/FOOTBALL/JV-BRAVES-FOOTBALL-2015/Vs-Hayesville-August-27/i-SJgGGjX