Over 50 million acres of land in Indian Country are already being used in agriculture and food production.  In Arizona alone, 20 million out of the total 26 million acres used for that purpose are on Indian land.

Yet, many in Indian Country do not have access to healthy foods.  That disparity was discussed in a symposium called “Feeding Ourselves: Food access, health disparities, and the pathways to healthy Native American communities” held at the Yellowhill Activity Center on Wednesday, Aug. 26.  The event was held in conjunction with the week-long Tri-Council activities between the Eastern Band of Cherokee Indians, the Cherokee Nation, and the United Keetoowah Band of Cherokee Indians of Oklahoma. 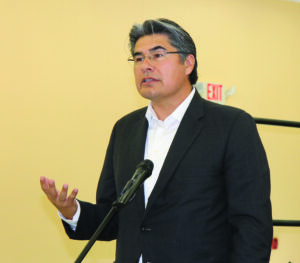 Wilson Pipestem, a member of the Otoe-Missouria Tribe and founder of Pipestem Law and Ietan Consulting, speaks during a symposium on food access and production in Indian Country that was held at the Yellowhill Activity Center on Wednesday, Aug. 26.

During the symposium, a report by the same name was presented by the three authors including: Wilson Pipestem, a member of the Otoe-Missouria Tribe and founder of Pipestem Law and Ietan Consulting; Janie Hipp, a member of the Chickasaw Nation and director of the Indigenous Food and Agriculture Initiative; and Crystal Echo Hawk, a member of the Pawnee Nation and president and CEO of Echo Hawk Consulting.

“Our little ones face epidemic proportions of obesity and type 2 diabetes,” said Echo Hawk.  “Oftentimes, we don’t realize how big of a part food plays in the health problems that we face as Indian people.”

Hipps said an important component is the idea of food sovereignty which helps to localize food systems control.  “No tribal government that I know of has a comprehensive food and agriculture law.  When we don’t speak in that space, then we are at the mercy of those who are.”

She added that most of the food laws are found at the state level, “State laws are all over the place and differ from state to state.”

Hipps encouraged tribes to form their own food or agriculture departments.  “We don’t have those people designated.  They need to be.”

Echo Hawk spoke about the “diet of poverty” that is affecting many in Indian Country.  “It’s cheaper to go out and buy a bunch of Big Macs.  We’re fueling the epidemic that is diabetes that is killing our people.”

“One out of two of our kids is going to get diabetes.  This is an urgent call to action.  We need to prioritize our health.”

She told the crowd of the first diagnosed case of diabetes in Indian Country which was in Arizona in 1933.  “There was no word in any Indian language for diabetes prior to European contact.  It’s a diet-related disease which means we have the power to change that.”

Amy Walker, an EBCI elder from the 3200 Tract, is an organic gardener and said that growing her food is very interconnected with the Cherokee culture.  “To me, when we raise our own food and share it, it nurtures our entire being.”

Big Cove Rep. Teresa McCoy is a long-time advocate for gardening, agriculture and food production.  “It’s going to require all nations to stand up and be heard.  The issue with food is universal.  The food that Native people used to eat is the best food, and its food that the entire country should be eating.  We should be planting 180 acres of sochan.”

All three of the main presenters encouraged partnerships within Indian Country on this issue.  “Food is an individual choice, but you can help provide healthy access to food,” said Pipestem.  “My hope is that Cherokee governments will take this up as projects.  Maybe we can get beyond the thinking of ‘are our people able to get something to eat’ and get to ‘do they have something healthy to eat?’”

To view a copy of the full report: Feeding Ourselves report