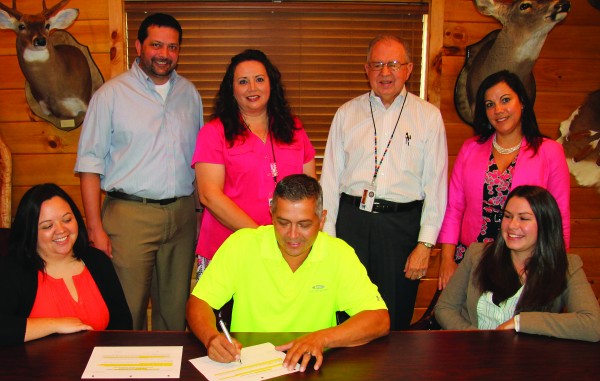 Principal Chief Michell Hicks signed a Title IV-E Pre-Print, which is a document containing plans and policies for the Tribe’s new child welfare system, in his office on Monday, Aug. 24.  The pre-print is a deliverable submitted to the U.S. Department of Health and Human Services, Administration of Children and Families – Children’s Bureau (US DHHS ACF-CB) for their review and approval.

“The pre-print evidences the EBCI Division of Public Health and Human Services (PHHS) compliance with all applicable federal laws and regulations by referencing tribal codes, program policies and procedures, administrative rules and forms (created in the past year) which meet each and every applicable federal requirement and demonstrate the development of a comprehensive child welfare program,” said Sheena Meader, EBCI associate counsel in the Office of the Attorney General.  “Once the pre-print is reviewed and approved by the US DHHS ACF-CB, PHHS will receive funding and specific levels of reimbursement for applicable program administration costs and to caregivers eligible to receive foster care maintenance payments, guardianship assistance payments, and adoption assistance payments.”

“We are starting to execute the documents to formalize the entire social service process,” said Chief Hicks.  “The final agreements are now intact for us to move ahead effective Oct. 1.  We are still working on some funding aspects with the state, but the majority of the funding issues including the staff and structure is now in place, and most of those folks are hired so we are moving ahead with this whole initiative.”

He added, “It’s really exciting.  I know it was a huge step, and there’s still a lot of work to be done.  But, I feel really good about where we’re at…it’s going to be good for our families and children in the future.”

Hannah Smith, EBCI Attorney General, related, “Writing the laws and policies contained in the IVE Plan (pre-print) was a labor-intensive process that began for the EBCI in 2009 and included learning and understanding complicated federal systems that feed into an IV-E program and then learning and applying the best integrative service practice concepts, all of which have culminated these past two years into the pre-print itself.”

Smith said many people worked on this project.  “Many tribal members and tribal employees have worked diligently to see this effort through, but especially a core team that was committed to this monumental achievement including: Sheena Meader, Tina Saunooke, Barbara ‘Sunshine’ Parker, Vicki Bradley, Doug Trantham and Shared Vision Consulting, LLC (David Hutchison and Patti Long).”