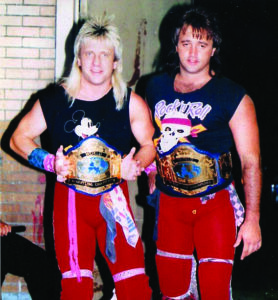 The Rock & Roll Express (Ricky Morton and Robert Gibson) will team with Cherokee’s own Ric Youngblood to take on the Enforcers of Pain (Max Mayhem and the Ice Man) in the main event of the RCW show at the Wolfetown Gym on Sept. 19. (RCW photo)

Professional wrestling action is coming back to Cherokee as Reservation Championship Wrestling (RCW) returns to Wolfetown Gym on Saturday, Sept. 19.  Ric Youngblood will team with the Rock & Roll Express (Ricky Morton and Robert Gibson) to take down the Enforcers of Pain (Max Mayhem and The Ice Man – John Owens).

Other action will include Shadow Wolfe competing for the U.S. title.  Crowd favorite Peanut Butter and Jelly will be on hand to keep the crowd entertained.  Mid-Night Soldiers are two promising young superstars whose high-flying wrestling adds excitement to any show.  Bad Boy Playboy Michael Green, and many other superstars, will also be there.  The Extreme Title Belt will be determined by a Battle Royal.

Special guest referee Robert Rio will be on hand to help keep things in order.  RCW is the only  Native American owned and operated professional wrestling show.  For the Sept. 19 show, gates open at 7pm and bell time is 8pm.

Ticket prices – Ringside: Adult $15, Child $10; General: Adult $10, Child $5.  Purchase your tickets before Wednesday, Sept. 16 and get $3 off any ticket price.  Tickets can be purchased at any of the three Ric’s Smokeshops or online at www.brownpapertickets.com.

“Reservation Championship Wrestling is very proud to announce that this show is dedicated to Principal Chief Michell Hicks for 12 years of dedicated service to the Eastern Band of Cherokee Indians,” said RCW officials.  “Help us show Chief Hicks how we appreciate his hard work and accomplishments during his tenure as Principal Chief.”