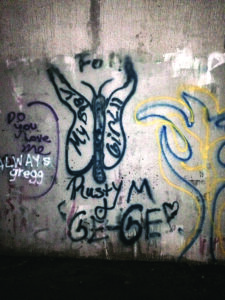 Great Smoky Mountains National Park rangers remind visitors that graffiti not only detracts from the natural beauty of the park, but can also permanently damage irreplaceable resources. Park resources including one of the best collections of log buildings in the eastern United States, backcountry hiking shelters, live trees, stone walls, bridges, and tunnels have all suffered from a range of small markings with ball point pens to elaborate markings with permanent marker to lewd and offensive spray paint messages that leave the park in worse condition.

Park rangers and volunteers educate visitors about the lasting implications of defacing the park’s natural and cultural resources through education programs, signs, and graffiti-removal program. Unfortunately, graffiti can seldom be removed from log structures without destroying historic wood which makes removal virtually impossible. “Bob Was Here” signs were installed at a variety of locations within the park to help deter the park’s 10 million visitors from leaving permanent marks on structures and long trails that damage park resources.

“The staff at Great Smoky Mountains National Park remains committed to preventing and removing where possible graffiti in the park,” said Superintendent Cassius Cash.  “The National Park Service, our neighbors and visitors, have an equal responsibility to ensure that this park is preserved unimpaired for the next generation.”

Those caught tagging the park can face serious consequences including arrest.  Those arrested could face fines of up to $5,000 and six months in jail.  Last month, five men were arrested at the tunnel at the end of Lakeview Drive near Bryson City for defacing park property.

“We appreciate the hard work of the park rangers for cracking down on people who mark or deface the peoples’ Park,” said Swain County Commissioner David Monteith. “People who visit our National Park should not have to put up with that.”