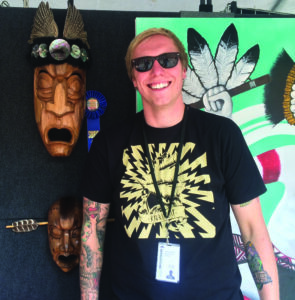 EBCI artist Shan Goshorn has lived in Tulsa, Okla. since 1981. Her multi-media work has been exhibited worldwide and is part of collections in the Smithsonian’s National Museum of the American Indian in Washington, D.C., Oklahoma’s Gilcrease Museum, the Museum of Contemporary Native Arts in New Mexico, and the Gorman Museum at the University of California, Davis, Calif., among others.

Among her many accomplishments, Goshorn was named Best of Class at SWAIA Indian Market and the Heard Museum Indian Fair in 2013 and at the 2012 Cherokee Art Market. Her work has been widely shown internationally in England, France, South Africa, Italy and China.

Adams was taking part in his first Indian Market. His work has been shown throughout the world and he most recently won Best in Show award at the 2014 Cherokee Indian Fair. His work was also chosen for the Art in the Embassies project and is currently on display at the Tanzanian Embassy. 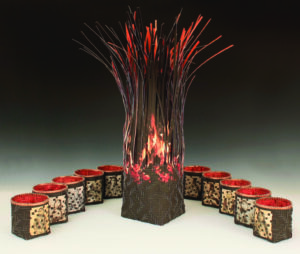 Shan Goshorn, EBCI tribal member, was awarded a blue ribbon and second-place red ribbon in basketry. Shown is her piece entitled “Hearts Of Our Women”.

Adams, Smith, and Grant were among 267 Native artists, craftsmen and musicians from through the country and Canada who were invited to participate in the second annual event.

The 94th annual SWAIA Market featured 1,100 Native American artists from 400 nations throughout the U.S. and Canada. Attracting some 150,000 visitors to Santa Fe each year, it is the largest juried Native American art show in the world.

“At Santa Fe Indian Market, we are not just promoting and selling art, we are unfolding the history and legacy of Native traditions and cultures, while recognizing contemporary growth and evolution,” said Dallin Maybee, SWAIA’s Chief Operating Officer. “Santa Fe Indian Market allows you to immerse yourself in a rich, sacred cultural experience. It is a place to embrace diversity, creativity, living traditions and a warm sense of family.” 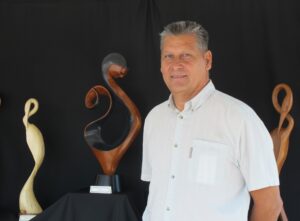 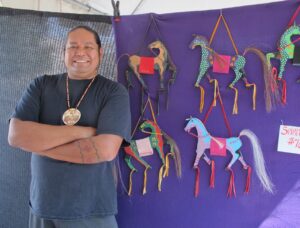