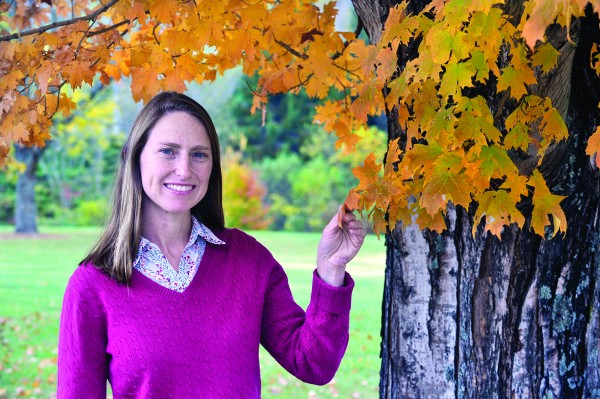 Western Carolina University’s autumnal season sage Kathy Mathews says fall leaf color in the mountains of Western North Carolina should be the best it has been in a number of years. (WCU photo)

CULLOWHEE – Fall leaf color in the mountains of Western North Carolina should be the best it has been in a number of years because of generally drier-than-normal conditions during 2015.

That’s the word from Western Carolina University’s autumnal season sage Kathy Mathews in her annual prediction of how foliage around the region will perform as the sunlight of summer wanes and days become frosty.

Mathews, an associate professor of biology at WCU, specializes in plant systematics and bases her color forecast on both past and predicted weather conditions. She believes that the formation of higher levels of pigments in the leaves correlates with dry weather throughout the year, but especially as fall comes around the bend.

“This fall could be one of the best leaf color seasons in Western North Carolina in recent memory,” Mathews said. “Three words explain it – unusually dry weather.”

U.S. Geological Survey records indicate that the region had been drier than normal for most of the year, but with enough rain, particularly in the months of April and June, to avoid drought and keep the trees healthy, she said.

Sugar concentrations in the leaves increase during dry weather because the trees are not taking up as much water through their roots, Mathews said. The abundance of sugars leads to the production of more anthocyanins, the red pigments that appear when green chlorophylls begin receding. “That’s what causes the leaf colors to really pop, along with the simultaneous appearance of orange and yellow pigments on the same or different tree species,” she said.

Some foliage fans may be wondering if the much-publicized El Nino weather pattern may affect the fall colors. Meteorologists are predicting a light hurricane season in the Atlantic this year, partly because of dry air over the Gulf of Mexico and Caribbean caused by El Nino, and that reduces the chances of heavy rain and big wind storms in the mountains in August and September – good news for the leaf display, Mathews said.

Leaf-peepers always want to know when the “peak color” will happen, but the timing of the color change is highly dependent on the decreasing amount of sunlight that comes with the passing days, plus the elevation of a particular location, she said. “The peak of fall color often arrives during the first and second week of October in the highest elevations, above 4,000 feet, and during the third week of October in the mid-elevations, 2,500 to 3,500 feet,” Mathews said. Visitors can look for leaves to be peaking in color intensity a few days after the first reported frost in any particular area, she said.

Regardless of all the factors that affect leaf color, visitors to Western North Carolina always will find a pleasing leaf display somewhere in the mountains from September into November, with a wide range of color made possible by the region’s elevations ranging from 1,500 feet to over 6,000 feet and the more than 100 tree species, Mathews said.