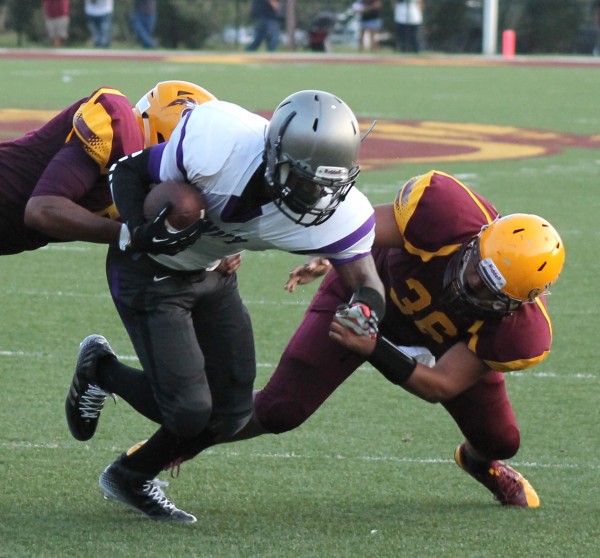 Cherokee’s Isaiah Evans (#5 at left) and Kennan Panther (#36) combine on a tackle of Trinity Academy’s Dillon Dye (#8) during last night’s season opener at Ray Kinsland Stadium. The Braves played strong defense all night to take a 34-7 victory over the Knights who were playing in their first-ever game. (SCOTT MCKIE B.P./One Feather photos)

Cherokee’s defense lived up to the pre-season talk as they caused four turnovers and held the visiting Trinity Academy Knights scoreless through three quarters in their season opener.  The Braves (1-0) rolled over the Knights, who were playing in their school’s first-ever game, 34-7 at Ray Kinsland Stadium on Friday, Aug. 31.

Kent Briggs, in his second season as head coach of the Braves, commented, “I’m really excited for our team.  We worked really hard in pre-season, and to come out with a victory, that’s what we work our tails off for.  The guys gave a great effort all game.”

Kennan Panther, Braves senior linebacker, was a pre-season All-State pick, and he led Cherokee with 15 tackles and a fumble recovery for a touchdown.  His counterpart at linebacker, Logan Teesateskie, was close behind with 12 tackles and an interception.

Tye Mintz, Braves sophomore quarterback, had a solid night going 8 of 14 with 80 yards and 2 TDs.  Darius Blanton, senior wide receiver, was his favorite target with 5 receptions for 55 yards and 1 TD.  Isaiah Evans got the Cherokee running game going with 83 yards on 19 carries and 2 TDs.

Cherokee got the ball first in this contest and punted after a three-and-out.  The Knights came out gunning early and got three first downs in a row taking the ball out to the Braves 44-yard line.  Then, a Trinity Academy running back fumbled the ball which was picked up by Panther who took it to the house for the first score of the season.  Dodge Crowe added the extra point and Cherokee led 7-0 at the 8:24 mark of the first quarter. 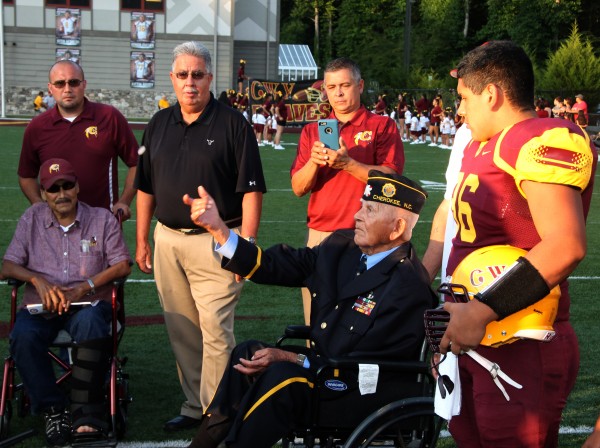 Several possessions later, Cherokee put together an eight-play 64-yard drive which culminated in a 1-yard touchdown run by Evans.  Crowe’s extra point was good and the Braves led 14-0 at the 8:20 mark in the second.

Trinity Academy only had the ball for five plays on their next drive which ended with a Teesateskie interception at the Knights 46-yard line.  Ten plays and over five minutes later, the Braves were back in the endzone as Jason McMillan, Braves senior wide receiver, caught an 8-yard touchdown pass from Mintz.  Crowe’s extra point took it to 21-0 with 2:27 left in the half.

The Knights couldn’t move the ball on the first three plays of their next possession and tried a long pass down the left side on a 4th and 6.  The ball sailed and was intercepted by McMillan at the Cherokee 12-yard line.  The Braves ran out the clock and took a 21-0 lead into the locker room.

Trinity Academy was forced to punt on their first possession of the second half and Cherokee took over on its own 25-yard line.   The Braves put together a 10-play, 75-yard drive that culminated with Evans scoring on a 1-yard run.  The extra point was no good and Cherokee led 27-0 at the 7:23 mark in the third quarter.

Both teams ended up punting on their next possessions.  Later in the quarter, Trinity took over after a Cherokee punt at its own 27-yard line.  On fourth down, they fumbled the ball which was recovered by Justin Brady, Braves senior defensive lineman, at the Knights 37-yard line.

Two plays later, Mintz connected with Blanton on a 17-yard touchdown pass.  Crowe added the extra point, and Cherokee led 34-0 with :04 left in the third.

Trinity Academy would get on the board early in the fourth quarter as Dae Jennings, Knights sophomore running back, ran 25 yards for a touchdown – the first in school history.  Grayson Vaughn added the extra point, and Cherokee led 34-7 which is how the game would end.

To view and purchase photos from this game, visit https://onefeather.smugmug.com/SPORTS/FOOTBALL/BRAVES-FOOTBALL-2015/Vs-Trinity-Academy-Aug-21/i-sWhXXkv