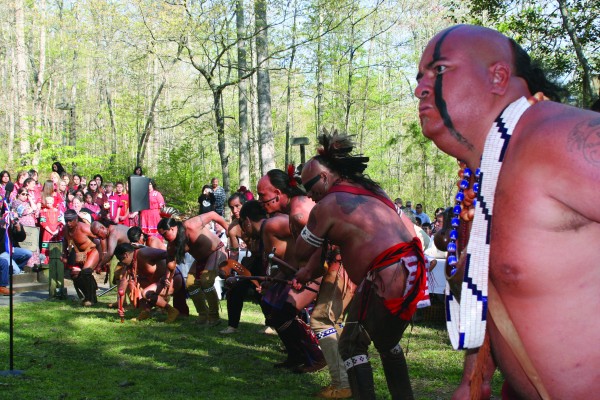 For the first time in six years, the three federally recognized Cherokee tribes will convene in Red Clay, Tenn., the site of the last seat of Cherokee government prior to the Removal.  The Eastern Band of Cherokee Indians will host a multi-day Tri-Council meeting starting on Monday, Aug. 24 and culminating on Friday, Aug. 28 with a business meeting at Red Clay State Park in Tennessee with leaders from the Cherokee Nation and the United Keetoowah Band of Cherokee Indians of Oklahoma (UKB).

“Our survival as Cherokee people is because of the work of tribal leaders throughout our history,” said Principal Chief Michell Hicks.  “Continuing to maintain our connection with our original homelands and to maintain our connection to one another is critical to the continuing success of our nations.  As we come together as a people at Red Clay more than 175 years after our nation was torn apart, we send a message to the world that our strength is rooted in our past and standing together for our future.”

Tribal Council Chairwoman Terri Henry commented, “We are pleased to welcome our relatives from the Cherokee Nation.  UKB will not be here for the week’s activities, but they will be at Red Clay.  The concept for these events and topics is community engagement and putting the social aspect into the week.  Planning and preparation naturally causes us to reflect on the historical significance of this coming together.”

Chairwoman Henry added, “Any time we reflect on the Removal, my mind draws to the images of cold, snow and mourning.  But, even as the federal policy and the individual will of one U.S. President sought to defeat the Cherokee, we are reminded that we are a strong and resilient people.  For those Cherokee who struggled to survive against all odds, we are grateful.  Not only have we survived, with the coming together of the three federally recognized Cherokee governments, we are a testament to our collective strength of resolve to live.  But, not only to live, but to thrive.”

The week’s activities will begin on Monday, Aug. 24 with the Firefly 5K Walk/Run which will begin at the Cherokee Indian Fairgrounds.  Registration will be from 6:30-8pm with the walk/run starting at 8pm.  “This is an event to encourage positive and healthy activity,” said Chairwoman Henry, “and, fireflies have an historical relevance as a symbol of remembrance of those passed.”

Tuesday’s activities will begin with a tour of the new EBCI Justice Center at 9am followed by a program presentation at the Cherokee Phoenix Theater at 10:40am entitled “New Tribal Social Services Initiative”.  The afternoon will be dominated with games at the Cherokee Indian Fairgrounds including archery, blowgun, marbles, Cornhole, and horseshoes.  A youth stickball game will be played at 5pm.

Later that evening, there will be a special free presentation of the play, “Sliver of a Full Moon” by Cherokee Nation playwright Mary Kathryn Nagel at the Chief Joyce Dugan Cultural Arts Center at 7pm.  The play is the story of the grassroots movement behind the historic VAWA (Violence Against Women Act) legislation that allows tribes to prosecute non-Indians for certain violent crimes committed on tribal lands. This presentation will feature several EBCI tribal members including: Billie Jo Rich, Yona Wade, Lori Sanders, Joe Owl, Philenia Walkingstick, and Tribal Treasurer Debbie Atuk will represent the Alaska Native women’s voice.

“’Sliver of a Full Moon’ demonstrates with heartbreaking clarity how the U.S. legal system has subjected Native women and communities to unspeakable violence,” said Chairwoman Henry who worked many years towards the passage of the legislation.  “Given the role that the Eastern Band of Cherokee Indians leadership and our Cherokee women played in advocating for VAWA, it is critical to raise awareness about the complexities of federal Indian law and how it impacts the everyday lives of Native peoples.”

Wednesday will start with a walk-through of the new Cherokee Indian Hospital at 9am followed by a program tour of the EBCI Water Treatment and Wastewater Treatment Program at 10:40am.  A symposium entitled “Feeding Ourselves: Cherokee Traditional Foods & A Healthier America” will be presented from 1:30-3:30pm at the Yellowhill Activity Building.  An adult stickball game will be held at 5pm at the Cherokee Indian Fairgrounds. A Twilight Ride with a cultural guide will be offered going to Watterock Knob leaving from the Cherokee Indian Fairgrounds at 6:15pm.

The main business meeting will take place at 9:30am on Friday at Red Clay State Park, and the public is welcome and encouraged to attend.

“In coming together, this is a time for us to begin to see each other are relatives, to forgive ourselves and each other, and to begin healing the intergenerational wounds that we have carried to today,” said Chairwoman Henry.