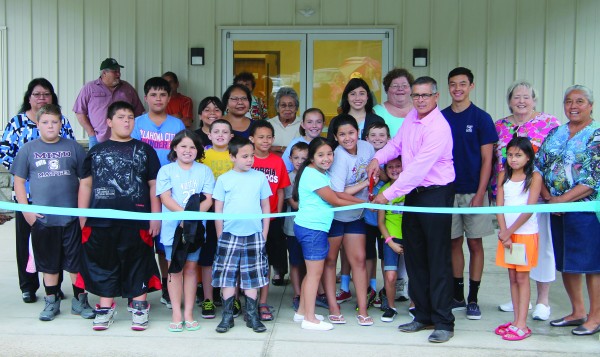 Almost two years from the groundbreaking and a total of 16 years since the project was first discussed, the new Painttown Community Building officially opened with a ribbon cutting ceremony on Friday, Aug. 14.  The 12,000 square foot community center has been built on a 2.1 acre lot and includes a full-size gym with hardwood floors, a kitchen, a community room, a workout room and office spaces.

“None of the projects that we do can be done by one individual,” said Principal Chief Michell Hicks.  “It takes a team of individuals.  It takes a good staff.”

Chief Hicks thanked various people who have worked on the project over the years including several seatings of Tribal Council as well as staff from the Commerce Division and the EBCI Recreation Department.  “I am proud to represent the Eastern Band of the Cherokee, but I am equally proud to be from the Painttown Community.  I think we have a great community.”

Vice Chief Larry Blythe commented, “It’s an absolutely wonderful day to be here with you…I want to read a quick word of scripture that I think helps capture the moment.  In Hebrews 3:4, it says, ‘every house is built by someone, but the builder of all things is God.’”

Tribal Council Chairwoman Terri Henry, who represents the Painttown Community, said, “We are grateful to the staff who picked up the initiative for this building and brought it to fruition…we know this community came together many years ago to build the community building that we have all called home.  Today, marks a new day in the Painttown Community’s history as we open this new facility, and I’ve been happy to support it.”

“It’s taken 16 years of patience and persistence to get here,” said Rep. Saunooke who submitted legislation to construct the building during her first term in Tribal Council in 2002.  She related that the legislation passed, but a lack of usable land caused the building to be postponed.

Rep. Saunooke said legislation was introduced and passed several more times, and finally, in 2010 a parcel of land adjacent to the laundry mat used by Harrah’s Cherokee Casino Resort was identified and sold to the Tribe.

“I applaud you as we celebrate the opening of our new community building,” said Rep. Saunooke.  “Margaret Mead once quoted, ‘never doubt that a small group of thoughtful, committed citizens can change the world.’”

Also, during the program, Jacob Sneed sang “America the Beautiful” in the Cherokee language.  Friday’s event was presided over by Lula Jackson, Painttown Community Club chairwoman. 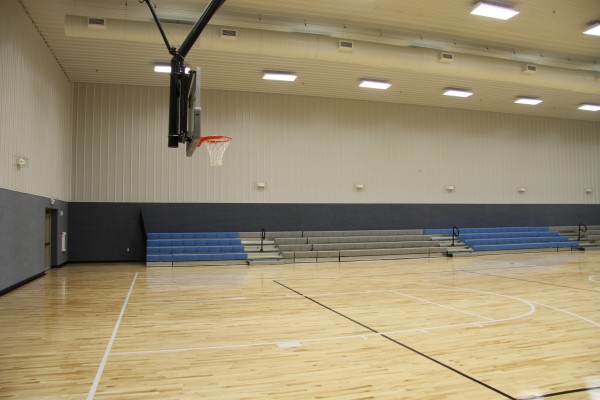 The 12,000 square foot community center has been built on a 2.1 acre lot and includes a full-size gym with hardwood floors (shown in photo), a kitchen, a community room, a workout room and office spaces.