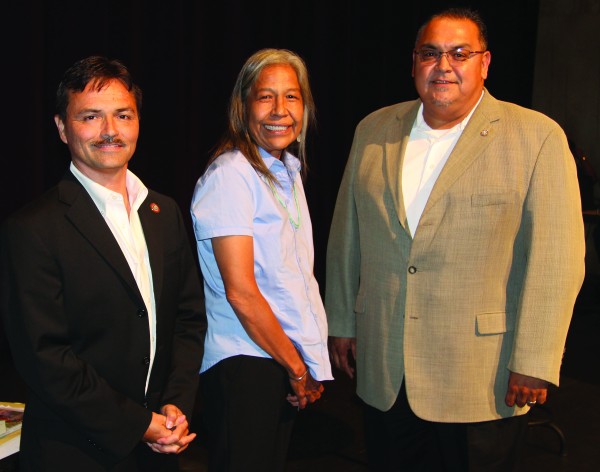 The three candidates for the Office of EBCI Principal Chief took the stage in a presidential-style debate at the Chief Joyce Dugan Cultural Arts Center on Thursday, Aug. 6.  The top two candidates in June’s Primary Election, Patrick Lambert and Gene “Tunney” Crowe, were joined by official write-in candidate Mary “Missy” Crowe in the debate sponsored by the Cherokee One Feather and the Junaluska Leadership Council (JLC).

The candidates were offered 17 questions on varying topics including revenue diversification for the Tribe, substance abuse issues among tribal members, land use issues, ethics, term limits, freedom of press and more.  Robert Jumper, One Feather editor, moderated the debate and Emily Sneed, a JLC member, served as the timekeeper. 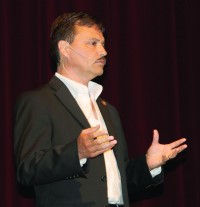 To open the debate, each candidate was asked what they felt was the most pressing issue facing the Eastern Band of Cherokee Indians.  Lambert said, “We’ve got a major debt problem.  We’ve got a major spending problem, and we’ve got a major drug problem.”  He proposed a three-tier approach to the drug problem including education, treatment, and punishment.  “We’ve got to teach our children that drugs are like snakes.  They do bite, and they will kill you.”

Tunney Crowe related that gaming expansion into nearby areas such as Georgia is a major concern for the Tribe.  He also related that the drugs and an increasing number of Hep-C cases is cause for alarm.  He then spoke about the need for revenue diversification and an increased police presence in the community.

Missy Crowe said, “I feel the most pressing issue is trusting our government and the structure of our government.”  She supports a referendum vote to amend the governing document allowing people the right to recall elected officials. 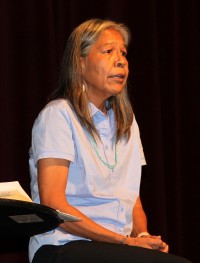 The idea of term limits for elected officials was discussed and Missy Crowe said she is more in favor of people’s rights to vote.  “If someone dedicates their life to the Tribe…I’d like to keep that person around as long as I can.”

Lambert commented, “I do support term limits.”   He supports limits of two terms for Principal Chief and four for Tribal Council, and he said it would best be accomplished through a referendum vote of the people due to the difficulty of getting such legislation passed by the same people it would affect.

Tunney Crowe noted, “Staggered terms can be a double-edged sword.”  He said it would be hard to lose elected officials that you like due to term limits.  He is in favor of increasing Tribal Council terms to four years and putting those on a staggered basis for elections. 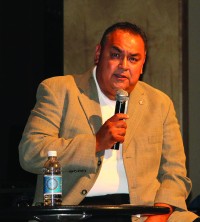 Ethics in tribal government has been a hot issue this election cycle, and all three candidates weighed in on the issue.  “The primary goal of my administration will be to deliver the most ethical, accountable and transparent tribal government in history,” said Tunney Crowe.  “All members of my administration will take an ethics pledge and ensure that all actions and delivery of services will be done honestly, fair and equal, with integrity for all tribal members.”

Missy Crowe read a dictionary definition of ethics and then stated, “Folks, that starts at the top.  You have to have a Principal Chief that has a high moral standard.  I’ll be the first to tell you that there’s nobody that’s perfect…but, one thing that I’ve always learned is that you have to humble yourself when you make a mistake.”  She added, “Ethics begins at the top with the Principal Chief and then it trickles down.”

Lambert said, “I’ve seen a lot of things that are just not right, but there’s no laws against it so one the first things I’ll do as executive is adopt a firm and strong ethics policy for the Executive Branch.”  He applauded Wolfetown Rep. Bo Crowe for his recent legislation setting up a Code of Ethics Committee.  “If that’s not completed by the time I’m elected, I will be there to help him and help Tribal Council get through that.”

The health care of tribal members was discussed and Missy Crowe said she submitted legislation seven years ago asking for health insurance for all EBCI tribal members.  “You see Obamacare.  That’s what they’re doing now.”  She said she would like to increase the health care and hospital budget of the Tribe to help increase services.  “My goal is that budget be $153 million or maybe up to $200 million.  I want us to stay home.  I want our babies to be born home.”

Lambert noted, “We have a beautiful new facility…but, we really don’t have any new services.”  He proposed building a medical park and encouraging private practice doctors to come to Cherokee to help increase those services.

Tunney Crowe said, “I believe each and every enrolled member deserves the best health care facility and services we can provide.”  He also said he would like to see pediatric services added back to the hospital.  “I want to bring back babies being born in Cherokee.  The hospital is definitely something the enrolled members wanted.  Now, let’s provide the best services that we can.”

Land use was discussed and Lambert related, “Housing is a real problem.  We have a severe housing crunch – a severe housing shortage.”  He said internal controls are preventing housing increases.  “We created regulations to stifle ourselves and almost put ourselves in a stranglehold.”  He proposed combining housing programs so people can have a one-stop shop when it comes to housing issues.  “We’ve got to get back to building homes.” 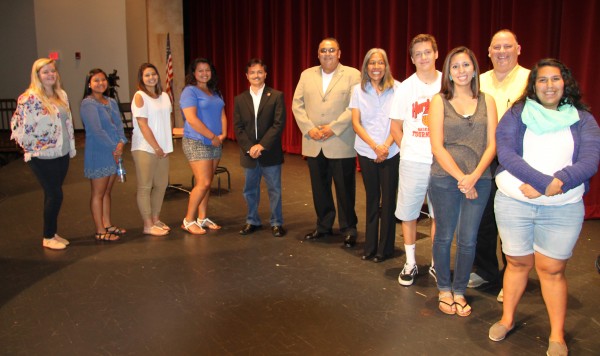 Tunney Crowe said he would develop a multi-year land use strategy while maintaining the idea of being good stewards of the environment.  “The Tribe’s in need of a comprehensive plan of how we can best use our land for housing and commercial purposes…I definitely think there’s room for improvement.”

Missy Crowe said protecting the environment is of vital importance, but said, “First, we need to know how much land we have.”  She proposed developing a 25-year growth plan plus expanding housing opportunities for tribal members.

At the end of the debate, each candidate was given four minutes for a closing statement.

Lambert said, “We have a very unique history, culture, language, but what really makes us so special is our families and the love of our families so that’s why I’ve adopted the slogan of ‘putting Cherokee families first’.”

“We’re one people, we all come together, we’re one family.  My primary focus is going to be providing care and a brighter future for every tribal member.”

He added, “I’ve put together some new and common sense solutions that put our Cherokee families first.  These plans include solutions such as reinstituting our tribal employee’s 5 percent 401K match so that whenever tribal employees retire they can retire maybe with a little bit more resources to have more of the comfort in retirement.  I think that we need to start saving more and spending less, and we need to make sure that the services for our elders are there…we have an opportunity now to get our Tribe back on track, back on a firm financial footing and protecting Cherokee families and advancing the Tribe is going to be my sole focus.”

Tunney Crowe said, “I will be honest and open and trust in you.  I will not prey off of your fears of unemployment, your fears of change or the fear and anger that have been built up in conspiracy theories and exaggerated information.”

“Going through life we all make decisions and sometimes it’s not the right decisions, but during this campaign the nastiness that’s come out, people have been talked about.  There’s been letters sent out about me that should have never gotten out.”

Crowe added, “I’ve proven myself over the last six years being a good Council member for the community of Birdtown.  Birdtown put me in this office six years ago, and I’ve done a good job for them.”

Missy Crowe referenced problems she had at the Tribal Election Board in filing for office and said that since she filed as an official write-in candidate she has met with Casey Cooper, Cherokee Indian Hospital CEO, and Cory Blankenship and Kim Peone with EBCI Budget & Finance to discuss budget needs and service needs for the health and human services components of the Tribe.  “We need money.  We need counselors.  We need front-line workers.  We need to help our drug and alcohol addicted people and family members.”

“I’m standing here today because someone didn’t give up on me.  One of them is the good Lord.”

She added, “It isn’t about who’s going where or who’s doing what or anything like that…the bottom line is there’s only one Qualla Boundary and each of us is equal.”