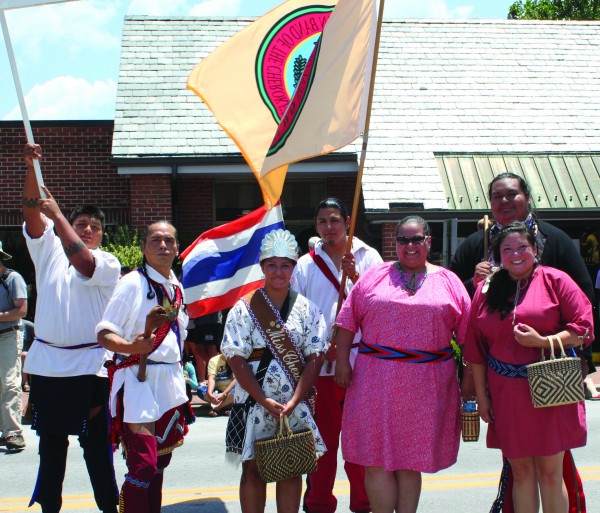 Siyo nigada! Hello everyone! Wow, another month has come and gone, but I enjoyed my last month of summer because this month myself, along with many on the Boundary will be going back to school soon!

July was an amazing month, and I was so honored to be representing the Eastern Band once again especially at our Annual 4th of July Powwow held here in Cherokee! It was my first time actually being apart of this powwow, and I was so honored to get to represent my people in front of the many nations that came to take part in our festivities, by walking behind the Eagle staff, and head woman and head man dancers during all grand entries.  It was very touching to take part in such an important part of the Powwow.  It was also an amazing experience to see all people from different nations come together as one, through song and dance. I was able to meet with some of the other beautiful royalty that traveled with the powwow, and even go to hand out cash prizes to our younger categories.

My next event was one that lasted over the extent of two weeks, and it was such an amazing opportunity! I got to attend the 2015 Folkmoot USA Festival in Wayenesville. I not only went as Miss Cherokee but as a part of the Tsalagi Touring program. We were able to showcase many of our traditional dances, as well as participate in the Folkmoot USA Parade of Nations in downtown Waynesville, where we were also announced honorary citizens of Waynesville! We all had such a great time experiencing the different cultures through songs, dances, and even their traditional foods. It was so neat to see all the differences in other people’s cultures, but also all the similarities! The group and I did a lot of mingling between all the different cultures, but we got especially close with the Philippine group from San Francisco called the Parangal Dance Company. They all were amazing, and it was an honor to watch them preform and even learn some of their dances.

We are now in the month of August.  Fall sports are starting up, and school is starting back.  The weather is soon to change, and fall time is upon us! That means time for everyone to buckle down and do well in school and for everyone to enjoy this next year of learning! That also means, its almost time for the Fall Festival! Two months to be exact, so two months for people to prepare for all the amazing festivities. That includes the upcoming 2015 Miss Cherokee pageant! If you’re interested in running for the title of Miss Cherokee and have any questions about the pageant, please contact Kritina Hyatt. I strongly urge all young women to take part in this life changing experience; even just running in the pageant is an experience itself! You want to represent your nation? Sign up now!

If you would like for me to attend an event, please contact Tooter Owens with your request!