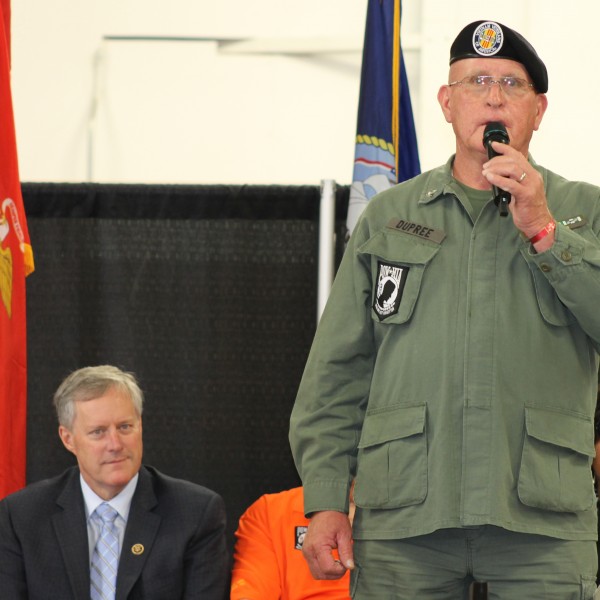 Close to three million American men and women were exposed to a deadly agent while serving in the Vietnam War.  Agent Orange, a toxic Dioxin compound used in defoliation, was literally dumped and sprayed throughout Vietnam in an effort to defoliate the jungle.

The Eastern Band of Cherokee Indians hosted a town hall meeting at the Cherokee Indian Fairgrounds on Saturday, Aug. 1 dedicated to educating Vietnam Veterans on the lasting effects of exposure to the deadly chemical and the evidence that now exists that it has multigenerational effects.

Vice Chief Larry Blythe welcomed everyone to the event which was organized by the Steve Youngdeer American Legion Post 143.  “We have good days like this because of people like you who sacrificed.”

Dan Sweet served in the U.S. Army in Vietnam from 1969-70.   His story with Agent Orange began in the field during his service time, and it continues to this day.  “I live with constant pain and fatigue and balance issues.” 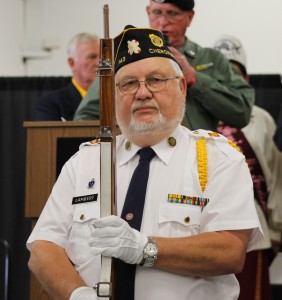 EBCI tribal member Sam Lambert, a member of the Post 143 color guard and a Vietnam Veteran, helped post the colors at Saturday’s event.

Sweet related that he and his wife, Teressa, were expecting their first child in 1972 when he saw the first effects of Agent Orange exposure.  “While at the hospital, the doctor came to see me, and he told me that our child was stillborn.  Our lives were shattered.”

Since that time, Sweet has been diagnosed with Irritable Bowel Syndrome, Peripheral Neuropathy, has had a tumor on his thyroid which resulted in removal of the left lobe of the thyroid, has had respiratory failure and now has Type 2 Diabetes.  “For those of you who suffer from diseases caused by Agent Orange, we can’t stop.”

Jack McManus served in the U.S. Air Force in Vietnam from 1967-68 and worked on Operation Ranch Hand which was the codename for the operation of dumping defoliants from U.S. Air Force planes during the War.  He related that Agent Orange was not the only chemical used during the War, but was one of several of the Rainbow Herbicides which included: Agent White, Agent Blue, Agent Purple, Agent Pink and Agent Green.

“Most of it was used for defoliation around the bases and along the rivers in the jungle,” he said.

McManus said Agent Orange was actually created during World War II for use in Japan, but it was first used by the British during a Communist insurgency in Malaysia in the early 1950s.  “Those British troops experienced many of the same problems as our troops have.  Science has shown dioxin severely affects gene change.”

Congressman Mark Meadows (R-NC) attended Saturday’s event and pledged his support to help all veterans with their benefit claims.  “We must not forget the sacrifice that not only you made, but the sacrifice that generations have made.  Serving veterans is a bi-partisan thing.  It is not a Republican thing or a Democrat thing.”

He added, “We will do our very best to serve you.  We will work to get you the care you need, the benefits you deserve and the respect and honor that comes along with that.”

Nancy Switzer, past and founding president of the Associates of Vietnam Veterans of America, said her experience with Agent Orange started as she attended veteran meetings with her husband who served in the War.  She said the wives of the veterans began to discuss amongst themselves about the number of miscarriages and stillborns they had suffered and the various medical issues of their children.

“This is a fight,” she said.  “This is a war.  I thought the Vietnam War was over with.  It’s not until we help our children…this is for your children.”