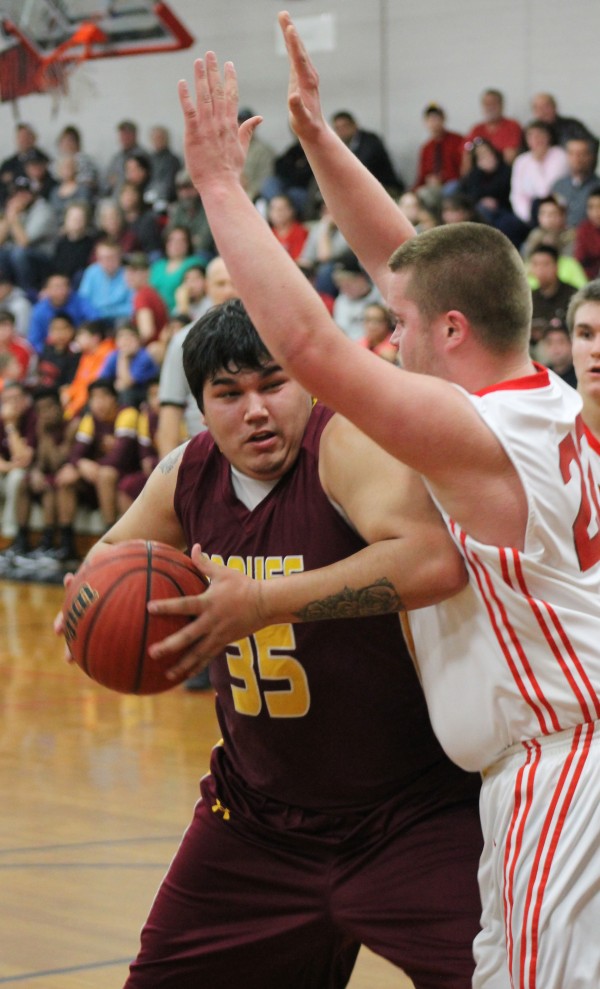 Eli Littlejohn (#35), Braves center, works hard inside against an Andrews player during a game at Andrews on Friday, Jan. 13. Littlejohn had 13 points and eight rebounds on the night. (SCOTT MCKIE B.P./One Feather)

ANDREWS – The Cherokee Braves outscored the Andrews Wildcats 31-11 in the third quarter to help elevate them to a large 86-56 win at Andrews on Friday, Jan. 23.  Dustin Johnson, Braves senior point guard, led Cherokee with 22 points as the Braves improved to 18-0 on the season.

“We played a good second half,” said Braves head coach Willis Tullos.  “We started out kind of slow and sluggish.”

Of his team’s performance in the second half, he related, “We just shot the ball a little bit better and played better defense.  We picked up our intensity a little bit and our focus a little bit.  We just elevated our game.”

Both teams did start out slowly, and Andrews actually took an early 4-3 lead just a couple of minutes into the game.  That was short-lived though as Cherokee took the lead back at the 4:45 mark and didn’t trail again in the game which was tied at 14-14 at the end of the first period.

Cherokee began to get some separation in the second period and led 29-22 following two traditional three-point plays by Johnson.  Kennan Panther, Braves forward, drilled two three-point shots in the final minute of the period to held Cherokee take a 37-26 lead into the locker room.  Panther finished the game with 15 points.

The third period was all Braves, and with 34 seconds left, Cherokee had doubled Andrews’ score at 68-34.  The period ended with Cherokee on top 68-37.

Cherokee kept up the pressure in the final period extending its lead to 77-43, and they held on to take the large 30-point win.

Eli Littlejohn, Braves center, played a nice inside game finishing with 13 points, eight rebounds, one steal and one block.

Jason McMillan, Braves forward, was on the ball most of the game and led the team with five steals on the night.

The Braves have a key matchup at Hayesville on Friday, Jan. 30.  “It all comes down to next Friday night,” said Coach Tullos.  “That will determine who will control everything.  We’ll be in good shape if we can just do what we need to do.”

To view and purchase photos from this game, visit https://onefeather.smugmug.com/SPORTS/BASKETBALL/BRAVES-BASKETBALL-201415/At-Andrews-January-23/