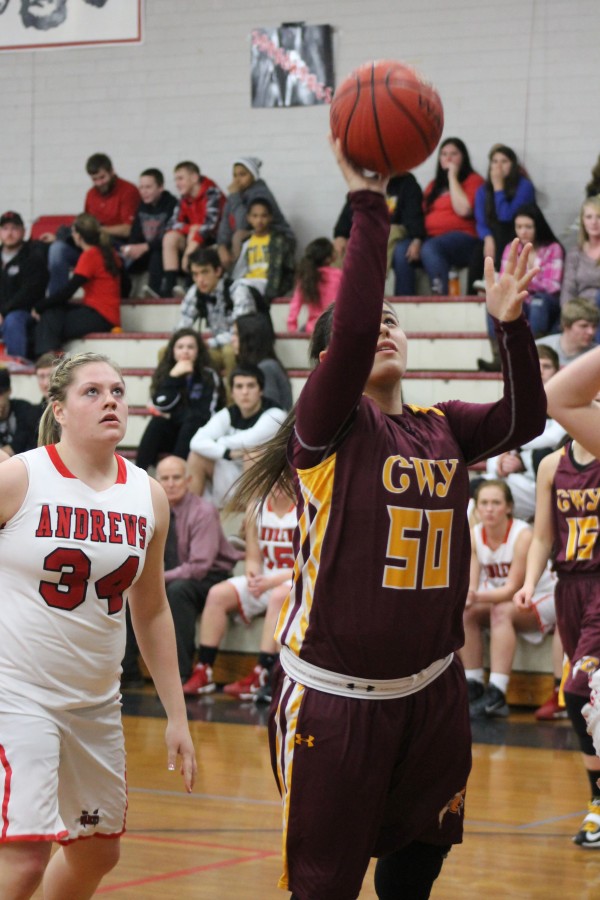 Timiyah Brown (#50), Lady Braves freshman forward, takes a shot in the first half of a game at Andrews on Friday, Jan. 23. She led Cherokee with 15 points as the Lady Braves won 69-44 and moved to 17-0 on the season. (SCOTT MCKIE B.P./One Feather)

ANDREWS – Four Cherokee Lady Braves were in double figures at Andrews on Friday, Jan. 23 as they improved to 17-0 on the season with a 69-44 win.  Timiyah Brown led Cherokee with 15 points followed by Bree Stamper 13, Reagan Barnard 13 and LeLe Lossiah 12.

The Lady Braves were without their top scorer, Kendall Toineeta, who was out due to illness.  Lady Braves head coach Chris Mintz was proud of their performance.

“We’re dealing with a lot of sickness right now, Kendall didn’t play,” he said.  “We’ve got about three other girls who are just coming back or starting to get it.  We didn’t play great, but we played good enough to win.  The second half we played a lot better than we did in the first half.”

Cherokee came out strong and outscored the Lady Wildcats 7-2 in the opening two minutes.  But, Andrews came back and scored eight unanswered points to take a 10-7 lead at the 2:52 mark in the first period.

The Lady Braves were unfazed though and kept plugging.  Lossiah hit a three-point shot to retake the lead with 54 seconds left, and Cherokee wouldn’t trail again in the game.

Cherokee came out blazing in the second half.

“We changed our defense a little bit,” said Coach Mintz of his halftime adjustments.  “We created more pressure so we didn’t have to run as far to get our pressure, and I think that ended up being a big difference.  They turned it over a bunch once we went to that.”

To view or purchase photos from this game, visit https://onefeather.smugmug.com/SPORTS/BASKETBALL/LADY-BRAVES-BASKETBALL-201415/At-Andrews-January-23/