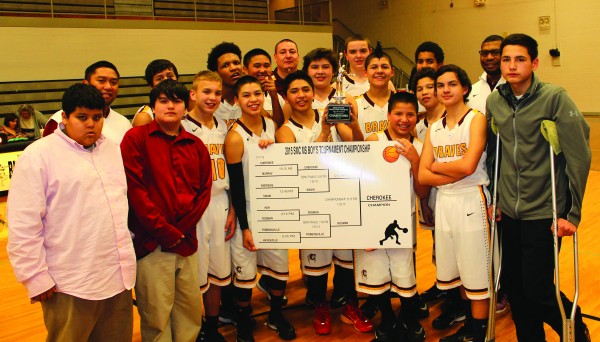 The Cherokee Middle School Braves pose with the brackets of the Smoky Mountain Conference tournament they won on Thursday, Jan. 22. They went 15-0 on the season and also won the regular season conference title. (AMBLE SMOKER/One Feather)

ROBBINSVILLE – The Cherokee Middle School Braves capped off a perfect season with a 77-42 victory over the Rosman Tigers in the championship finals of the Smoky Mountain Conference tournament held at the Robbinsville High School on Thursday, Jan. 22.  The Braves finished the 2014-15 season at 15-0 as the SMC regular season conference champions and SMC tournament champions.

“That was a great way to end a great season,” said Braves head coach Spencer Moore after the game.  “It means a lot to go 15-0 and be back-to-back Smoky Mountain Conference champions.  These eighth graders have only lost two games in their middle school career.  Overall, I’m proud of the team as everyone played hard and played well.

Cherokee took control of the game early by putting points on the board fast and holding the Tigers offense to minimal gains.  The Tigers fought back, but the young Braves were able to quell any comeback attempts as Cherokee pulled away for good late in the game to secure the victory.

The Braves defeated the Murphy Bulldogs in the first round on Saturday Jan. 17 and the Swain County Maroon Devils 69-21 in the semi-finals on Jan. 20 to advance to the championship finals.

“If our boys keep striving and working hard, this group, right here, will win the state championship,” said Coach Moore.