BASKETBALL:  Braves win by 20 points in The Pit 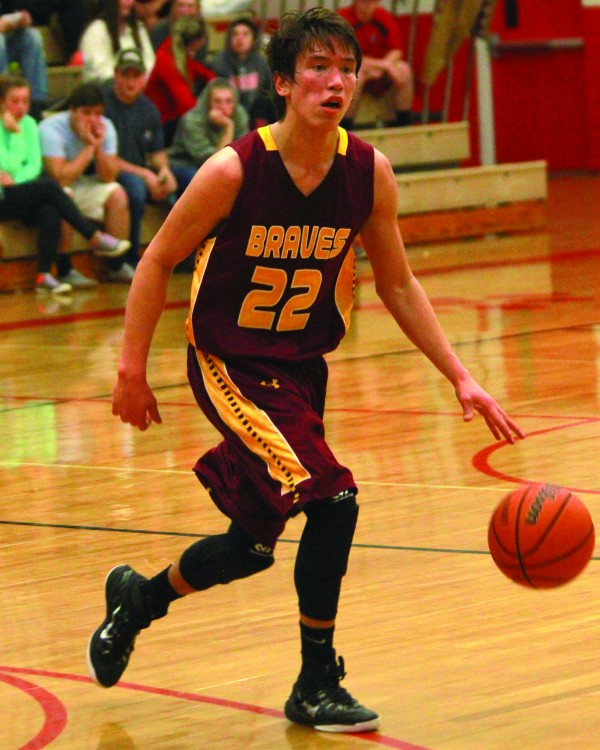 Dustin Johnson, Braves senior point guard, brings the ball up the court at Franklin on Wednesday, Jan. 21. Johnson led the Braves with 34 points as Cherokee improved to 17-0 on the season. (AMBLE SMOKER/One Feather)

FRANKLIN – The Cherokee Braves (17-0) traveled to “The Pit” for a contest against the Franklin Panthers on Wednesday, Jan. 21.  After a sluggish start, the Braves were able to rally back and take a 77-57 victory to keep their perfect season intact.

“The second half, we played really, really well; it’s about as good as we played all year,” said Cherokee Braves head coach Willis Tullos.  We just made a really simple defensive adjustment.  We felt like we were gambling a little too much on defense and we gave up some easy baskets.  We wanted to make them earn everything thing they got.”

The Braves fell behind early as the Panthers took a dominating lead in the opening minutes of the first quarter when Cherokee struggled with shooting and grabbing rebounds.  However, as the quarter continued, the persistent Braves chipped away at the Panther’s lead as a Dustin Johnson basket gave the Braves their first lead of the game at the 2:53 mark.  Johnson and Jason McMillan began to find their rhythm late in the opening quarter as the Braves take a 24-20 lead to the bench.

The seesaw battle continued throughout the second quarter as the Braves defense began to click; forcing the Panthers to commit costly turnovers.  However, Franklin was able to outscore the Braves 21-17 to close out the quarter and send both teams to the locker room tied at 41.

The Braves came storming out of the gates after halftime as the shooting of Johnson and McMillan began to find their mark; scoring 24 third quarter points collectively.  The Braves potent defense came alive by only allowing Franklin 10 points in the third quarter and building a 65-51 lead.

Continuing to build on their third quarter performance, the Braves slowed the game by freezing the ball when Johnson, McMillan, and Brandt Sutton showcased their basketball handling skills, effectively running the minutes off the clock and limiting the Panthers scoring opportunities.  A gassed Panthers offense struggled to find the basket as the Braves outscored Franklin 12-6 in the final eight minutes of regulation to seal the 77-57 victory.

To view photos from this game, visit http://onefeather.smugmug.com/SPORTS/BASKETBALL/BRAVES-BASKETBALL-201415/At-Franklin-January-21/