ON THE SIDELINES:  Western North Carolina overlooked by All-American selections

Several weeks ago, the McDonalds All-American Game nominations were announced.  A total of 823 players nationally were nominated for inclusion in the prestigious game which, over the years, has included stars such as Michael Jordan, Magic Johnson, Isiah Thomas, Kevin Garnett, Shaquille O’Neal and others.

A total of 24 boys and 24 girls will make the squads for the game scheduled for April 1 at Chicago’s United Center.  Out of those nominations, there were nine from North Carolina, but not one from western North Carolina.  Not one. 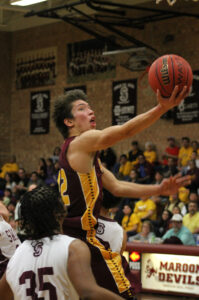 Both of Cherokee’s teams are ranked in the state (Lady Braves #1, Braves #3) and are undefeated.  Do you mean to tell me that Dustin Johnson and Kendall Toineeta, arguably the best point guards in the entire state of North Carolina, can’t even be nominated?

I understand that they may not have made the final teams, and I truly understand that it is hard to find America’s best high school players, but I also find it mind-boggling that not one player in western North Carolina deserved at least a nomination.

I’d put Dustin and Kendall up against the best, and I know myself, and all Braves fans, wouldn’t be disappointed in the outcome.  Come on McDonalds Selection Committee, next year at least give western North Carolina a shot.  There’s some good ball being played here in the mountains!

Well, I suppose everyone is going to gear up for the big game on Sunday between the Seahawks and the New England Ball-Deflaters (I mean Patriots), but I haven’t decided what I’ll watch yet.  The NFC championship game was rough for us Packer diehards.  At least we have some good basketball on Friday night as Cherokee travels to Hayesville.