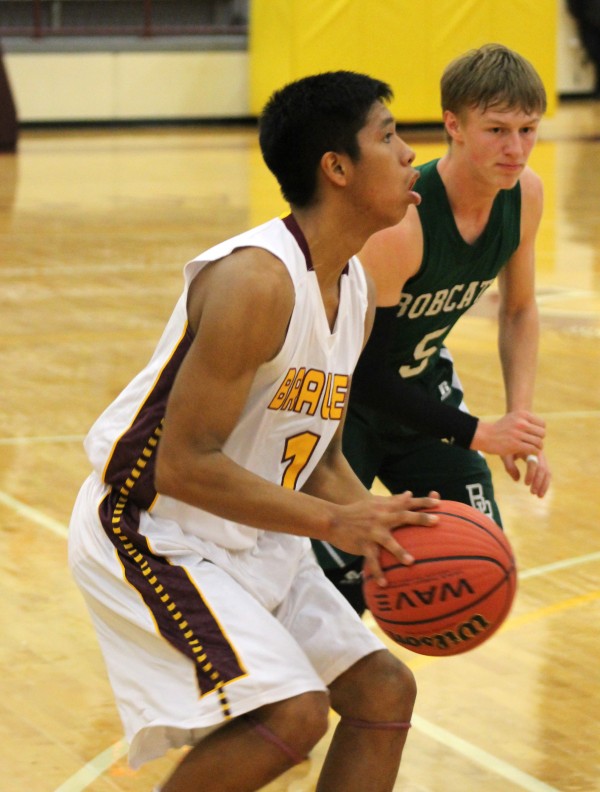 Cherokee’s Jason McMillan (#1) prepares for a jump shot during a home game on Tuesday, Jan. 20 as Blue Ridge’s Michael Jennings tries to defend. McMillan led Cherokee with 19 points as the Braves improved to 16-0 on the year with a 65-21 victory. (SCOTT MCKIE B.P./One Feather)

The Cherokee Braves (16-0) remained unbeaten with a huge 65-21 win over the Blue Ridge Bobcats at home on Tuesday, Jan. 20.  Cherokee was led by Jason McMillan with 19 points and five rebounds.

As a team, the Braves had some troubles getting their shots to fall shooting 50 percent from the floor and 67 percent from the free throw line – all things Head Coach Willis Tullos is hoping to improve upon as the team looks for a playoff run.

“We weren’t real sharp,” he said.  “We’ve got to get a lot better if we’re going to win.  We’re just not playing really well right now.  We’ve got to play with more intensity, and we’ve got to execute better.  Our intensity level is low.”

The game started out slowly with both teams missing some shots early.  Cherokee got it going a few minutes in though as Dustin Johnson, Braves senior point guard, hit a three-point shot to break the ice.  The Braves played nice defense in the first period and held Blue Ridge scoreless until the 2:47 mark.  They led 19-2 after the first.

Cherokee extended their lead to 30-4 at the 5:52 mark in the second period and took a large 42-10 lead into the locker room.

The NCHSAA mercy rule took effect right off in the second half, and the third period went very quickly.  Steven Straughan, Braves forward, hit a three-point shot to end the period as Cherokee led by 40 points (54-14).

The fourth period also breezed by, and the Braves outscored Blue Ridge 11-7 to take the big win.

The Braves won the turnover battle in this game having 15 while only giving up seven.  They also had a better three-point shot percentage (35 percent to Blue Ridge’s 15 percent).

To view or purchase photos from this game, visit https://onefeather.smugmug.com/SPORTS/BASKETBALL/BRAVES-BASKETBALL-201415/Vs-Blue-Ridge-January-20/