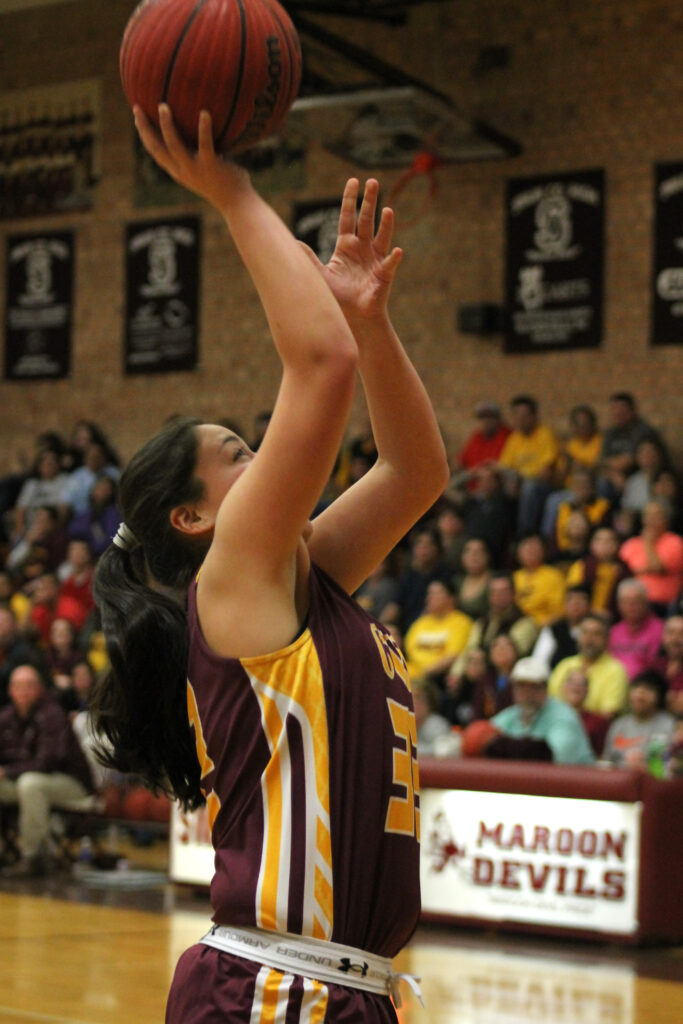 Peri Wildcatt (#32), Lady Braves senior forward, scores a basket, her first of the year, at the end of a game at Swain on Friday, Jan. 16. Wildcatt was able to enter the game after spending all season rehabbing a serious knee injury. The Lady Braves pulled to 14-0 on the year with a big 87-35 win. (SCOTT MCKIE B.P./One Feather)

BRYSON CITY – The Cherokee Lady Braves (14-0) remained unbeaten on the season with a big win at Swain on Friday, Jan. 16 as the Lady Braves topped the Lady Maroon Devils 87-35.

“I thought, defensively, we didn’t play that well in the first half, but in the second half we played a lot sounder,” said Lady Braves head coach Chris Mintz who is getting his team ready for a push towards the playoffs.  “We just have to keep building.  We have a couple of key games coming up that are going to be pretty tough.  We did a great job in the second half, and we just have to keep building on what we’re doing.”

The game started out slowly with both teams missing shots early.  LeLe Lossiah, Lady Braves senior forward, got things going with a three-point shot at the 5:55 mark in the first period.  She ended the game with 12 points.

Cherokee got it going from there taking a 12-2 lead midway through the period.

Cherokee kept it going in the second period and extended their lead to 32-11 just a few minutes in.  They went on to take a 46-22 lead into the locker room.

The second half was all Cherokee.  They came out of the blocks in the third and took a commanding lead, and with just over a minute left in the period Timiyah Brown hit a three-point shot to give the Lady Braves a 71-29 which invoked the NCHSSA mercy rule whereby the clock ran continuously for the remainder of the game.

Cherokee led 75-30 after the third period.  They went on to dominate the fourth outscoring Swain 22-4 to take the big win.

One awesome moment came with just over one minute left in the game as Peri Wildcatt, Lady Braves senior forward, entered the game.  It was her first game time all season as she has been out with a serious knee injury.

Shortly after entering the game, Wildcatt took a pass underneath and made a lay-up to thunderous applause by Cherokee fans.

To view or purchase photos from this game, visit http://onefeather.smugmug.com/SPORTS/BASKETBALL/LADY-BRAVES-BASKETBALL-201415/At-Swain-January-16/