BASKETBALL:  Johnson gets 35 points to lead Braves over Swain 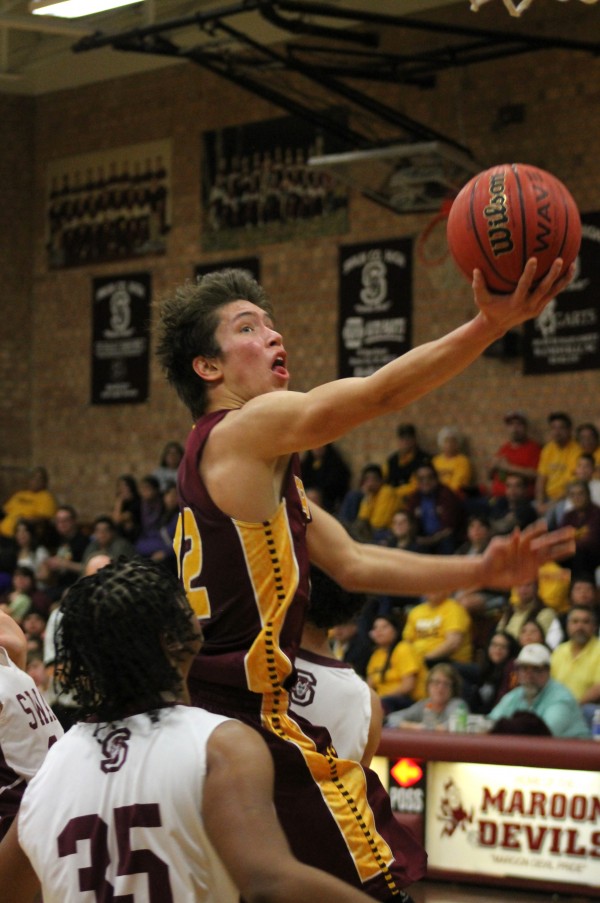 BRYSON CITY – Dustin Johnson, Braves senior point guard, scored the first five points of the game and just kept going as he led Cherokee to a 96-55 win at Swain on Friday, Jan. 16.  He led the team with 35 points as the Braves improved to 15-0 on the season.

“We played up and down – no consistency at all,” said Braves head coach Willis Tullos.  “We didn’t play very good defense.”

When asked how the Braves are preparing for the remainder of the regular season and pending playoffs, he related, “We’ve got to get a lot sharper.  We’ve got to play better defense.  If we’re going to go deep in the tournament, we’ve got to play great defense.  So, that’s the main thing we have to focus on.”

Cherokee came out swinging in this game and took a 7-0 lead at the 6:27 mark of the first.  At the 3:37 mark, they had extended that lead to 15-2.  Logan Teesateskie, Braves forward, hit a three-point shot to end the period as the Braves lead 26-12 after one.

Johnson drilled two three-point shots to start the second period.  Cherokee had extended its lead to 41-23 midway through the period, but Swain came back and hit three three-pointers in the final minute to cut into Cherokee’s lead (49-36) at the half.

The third period was a little more even with Cherokee outscoring Swain 17-15 to take a 66-51 lead into the fourth.

The final eight minutes were all Cherokee though as the Braves outscored the Maroon Devils by a whopping 30-4 to take the big win.

To view and purchase photos from this game, visit https://onefeather.smugmug.com/SPORTS/BASKETBALL/BRAVES-BASKETBALL-201415/At-Swain-January-16/